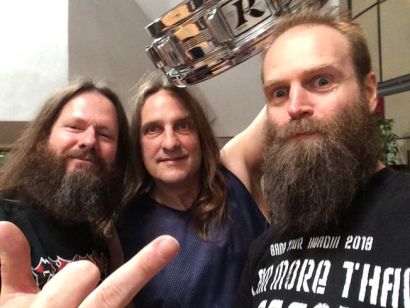 “We are well into drum tracks; everything is going super smooth and Tom [Hunting] is just killing it! Best drum sound this band has ever laid down – sounds just simply pummeling! Only one more song and some B sides to go, then we go through things and make sure everything is up to par, and then time for guitars! Can’t wait to add the crunch to these monsters. This is gonna be so goddamned heavy it ain’t even funny! We couldn’t be more stoked and pleased with how this record is coming along! Bludgeoning!”

The band performed at Kirk Von Hammett’s Fear FestEviL in San Francisco in early February. This May, they’ll play six shows as direct support to SLAYER with openers SUICIDAL TENDENCIES before joining GUNS N’ ROSES, AVENGED SEVENFOLD, and KID ROCK at this year’s Rock On The Range festival.

Dates with Slayer and Suicidal Tendencies: