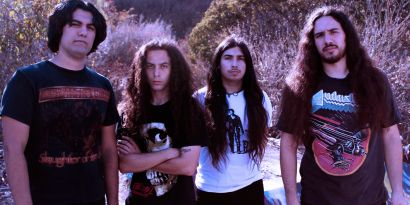 Southern California death/thrash quartet EXMORTUS have signed with Prosthetic Records. The band’s invigorating twin-guitar mix of neoclassical shred, Bay Area thrash, progressive death and traditional heavy metal has earned a devoted following in the Western US . The group’s full-length Prosthetic debut and third album overall will be released in February of 2014, when they will tour North America with DARK TRANQUILLITY and OMNIUM GATHERUM.

“We’re very excited and proud to announce our signing with Prosthetic Records,” the band says in a statement. “The staff there is great and very enthusiastic. They’ve signed so many great bands over the years and continue to do so, some in which have even given us some influence. Being fans of the label and their artists, it just feels like a perfect fit. We can’t for wait Prosthetic to put this next record out!”