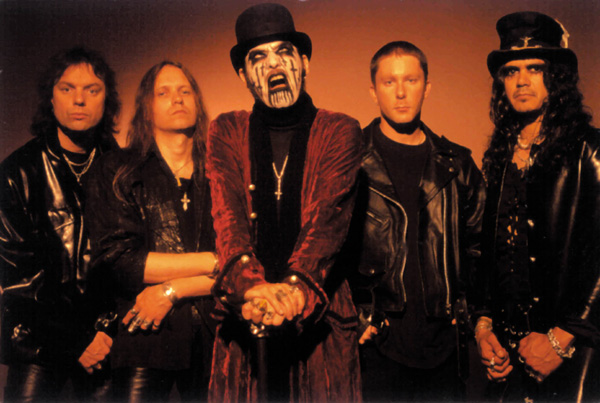 Former bassist KING DIAMOND bass player Hal Patino has released the below statement in regard to the announcement he was fired from the group today:

“It’s sad that it had to end this way after — 19 years. I have always been 100% loyal to everyone in the band, and have always given my everything — onstage and offstage. Since Day One, I have always had KING DIAMOND as my No. 1 priority. I’ve never ever missed any shows or rehearsals — my performances have always been well prepared (and I’ve always been ahead of the game). I have been a faithful friend to King, and kept my spirits up even in the toughest times.

“I will not go into every detail, but the salary I was offered to headline Wacken Open Air, and the four other shows this summer was totally ridiculous. Two days before the first rehearsal day, I wrote an e-mail explaining my view on that topic along with a proposal for a fair and realistic salary for these shows. For this, they accused me of ‘blackmailing’!!! I found it disrespectful, and told them that if that is how I get treated after 19 years, we part immediately! So I already left the band on Thursday the 17th of July, by my own choice. Of course it’s not the only reason why I have decided to leave. Problems already occurred during the last European tour. Suddenly there were rules for my stage clothes and my way of performing, and there were bad vibes because I promoted and helped my son’s band.

“It’s typical King to say that I’m fired — he did the same to me back in 1990 when he told the press that I was kicked out of the band due to lack of enthusiasm and drug problems. That was NOT the reason … It was just too much touring, King got dropped by Roadrunner Records, and I wanted to go in another direction. He did the same to my best friends Mikkey Dee and Pete Blakk. I am in Norway at the moment and will play two live shows with my other band. I told the KING DIAMOND camp that I would be able to fly back and forth so I did not miss the two first rehearsals — and the next thing I read is a statement from King where it says that I’m fired.

“I feel absolutely nothing for King Diamond and the band. I am proud to have been part of the classic albums, and the glory days in the ’80s. And that’s all!! I really appreciate all the messages I have received from so many people, and I just want you to know that I’m busy with my new band NORDIC BEAST, with Mikkey Dee, John Norum and Co.

“I got my other projects AMMUNITION and the ROCK ‘N ROLL ADVENTURE, and I’m playing and writing with my son Maryann Cotton who’s working with Dick Wagner and Alice Cooper on his new album. I’m a permanent member of the band, and I’ve written 30% of the album together with Maryann. It’s going to be a full concept album in the spirit of Alice Cooper’s ‘Welcome To My Nightmare’. I’m also planning a solo project for the future. I hope that many of the ‘diehard fans’ that I’ve met over the years understand my decision to leave the band.

“Thank you all. See you on tour with my other projects and bands. Rock ‘n roll!”