Ex-ANTHRAX Guitarist Dan Spitz Arrested On Suspicion Of Domestic Violence, But Will Not Be Charged 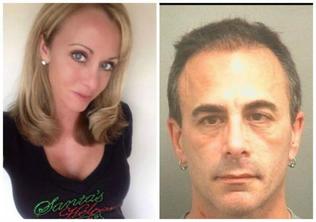 According to Jose Lambiet’s GossipExtra.com, former ANTHRAX and current RED LAMB guitarist Dan Spitz was arrested early Christmas morning at his house in Florida on suspicion of domestic violence.

The 50-year-old musician was picked up by Palm Beach County Sheriff deputies and booked in to the county jail about 5 a.m. after an argument with his wife of seven years, Candi.

According to the police report, Spitz and his wife — who have autistic twins — got into a physical confrontation at their Lake Worth home after drinking heavily on Christmas Eve. It is alleged that Dan wrapped his hands around Candi’s neck and tried to choke her, leaving visible bruises on her neck.

The guitarist, who told the deputies that his wife assaulted him first, sustained scratches on his chest, neck and arms.

Candi’s mother described Dan as “very aggressive” toward Candi and told deputies she heard her daughter scream, “I can’t breathe.” The mother did not witness the physical confrontation, which allegedly took place in the couple’s bedroom.

The couple argued over another man that Candi dated when she and Spitz were briefly separated last year.

Spitz was released on his own recognizance yesterday afternoon.

Spitz’s wife says that she will not press charges against her husband for allegedly assaulting her Christmas morning.

The 50-year-old musician was arrested at he couple’s home in Lake Worth, Florida when Candi’s mother called 911 to report he was trying to choke his wife.

“I’m not planning on pursuing this in court,” Candi, 38, tells GossipExtra.com. “This was a big misunderstanding. My mom should’ve never called 911.”

She adds: “[Dan and I] were separated for a week last year, and Christmas Eve was the first anniversary.

“The stress level at home has been astronomical. Our children are both autistic and Dan may have early onset Parkinson’s Disease.

“We were all drinking wine, and he just snapped.”

According to Candi, the confrontation happened when her husband started packing her bags, and she stood in his way.

“No matter what’s in the police report,” Candi says, “he never hit me or tried to harm me. He did shove me, and unfortunately I bruised my shoulder.