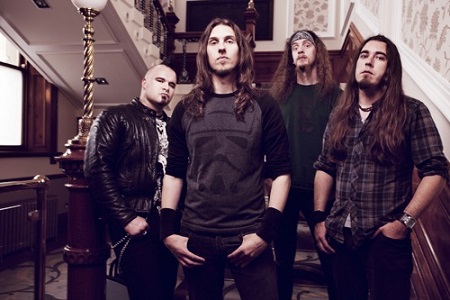 British thrashers EVILE are now accepting applications for their vacant lead guitarist position. If interested, please send any links, videos, photos and biogs as well as a brief statement about yourself to: evileguitarist@gmail.com.

On August 30, guitarist Ol Drake announced his departure from EVILE. he explained in a statement: “Over the past year, I’ve, unfortunately, found myself becoming more and more detached from the touring/band lifestyle.

“In my opinion, the music business for a band of our genre and ‘level’ determines a very unrealistic way of life to me, and I personally find it difficult to make a living and have a ‘normal’ life.

“I’ve reached a point where I want a family/kids, a house, a steady and definite income and everything in between, and in regard to my personal preferences, a touring band’s income and uncertainties, in the state that I feel they would continue to be in, has become incompatible with how I feel and what I want/need.”

EVILE released its fourth album, Skull, on May 27 in Europe on Earache Records and in North America via Century Media/Earache Records.