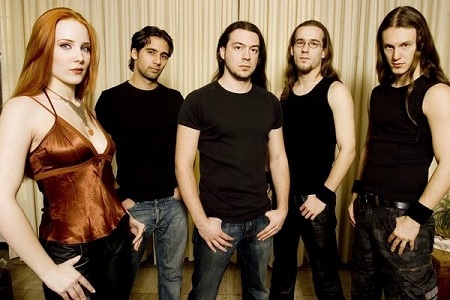 “Our show at Graspop [Metal Meeting in Dessel, Delgium] on the 30th of June marked the end of the ‘Requiem For The Indifferent‘ touring cycle. We would like to thank all our loyal fans who have, once again, carried EPICA to the next level.

“Our world tour promoting ‘Requiem For The Indifferent‘ has given us a ton of wonderful new memories. We played a lot of new places like Australia, China, Taiwan, Indonesia, Belarus and Dubai and welcomed new fans at every one of the 100+ shows of this world tour. A new milestone for us was reached during Retrospect, the celebration of our 10th anniversary! We will never forget being on stage with this huge orchestra and choir in front of the 4500 fans from all over the world.

“As you know, we will take a step back from playing live shows for the upcoming months since [EPICA singer] Simone [Simons] and [her boyfriend] Oliver and [EPICA keyboardist] Coen [Janssen] and [his wife] Linda are expecting children.

“During this period, we will be finalizing our live CD, Blu-ray/DVD Retrospect, which will be released in the autumn of this year. Besides that, we are in the pre-production phase of the sixth EPICA studio album which we will start to record at the end of this summer and which will be released in spring 2014. We can’t wait to share the Retrospect show and our new music with you all and we hope to see you on the road in 2014!!”