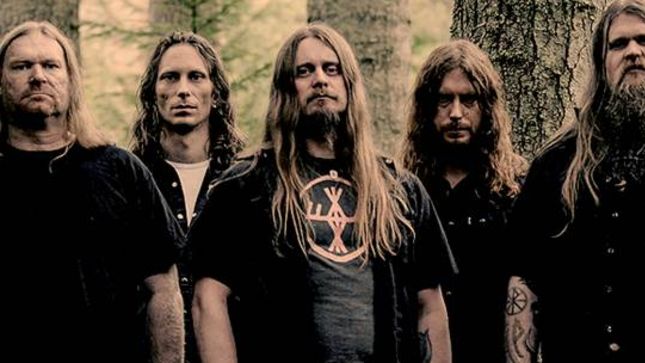 Checking in once again from the studio, members of the Norwegian extreme progressive outfit ENSLAVED offer a fourth installment in the seven-part Diary Of Mad Men series, giving fans an insight into the band’s forthcoming as-yet-untitled thirteenth studio album, set for an early 2015 release.

Wow, time flies when you’re having a magical time,” states guitarist and composer Ivar Bjørnson. “Already Friday, and Cato [Bekkevold, drummer] is doing his last tracking already. It will be a lot more quiet around the studio from now on. Doing stuff live has the benefit of several things being done at the same time, so Grutle [Kjellson, bassist and vocalist] is beginning to move on to some double bass (!) additions and we’re getting Ice Dale’s guitars over from his studio and added to the main sessions. This is shaping up big time. Tomorrow is a day off, kind of. Me, Cato, and Iver [Sandøy, co-producer] are using the up-and-running studio to record drums for another project – more on that another time.”

Bassist and vocalist Grutle Kjellson adds: “It is always a bit difficult – and that’s the beauty of it – to exactly pinpoint the direction of a new album before the final mix is done! However, I feel that this one will be quite the darker effort compared to our latest releases. It is leaning towards both our heavier albums and the darker side of ‘70s rock, long and interesting songs with a laser-sharp edge. I hope and believe our fans will embrace it.”

In other news, ENSLAVED have been confirmed to play a second show at Roadburn 2015 on Saturday, April 11th, in addition to their special House of Northern Gods performance on Friday, April 10th, 2015.

“The Friday show during Roadburn 2015 will indeed be a special one”, says Ivar Bjørnson. “We have named the concert House Of Northern Gods and it will consist of a walk-through of an imaginary, magical house. It is a mental construction that could represent the mythological Valhalla with its inhabitants – or in Jung’s school of psychology: the archetypical roles of the human psyche. This will be the foundation for the set-list and the framework around the concert; there’s a stem of thematic songs from Allfadr Odinn (the Paternal archetype) on Hordanes Land in 1993 up to “Materal” (the Maternal archetype) from 2012’s RIITIIR where various characters/ roles in the House of Northern Gods are represented and materialized into music. These are the songs that will make up the Friday show at Roadburn 2015!”