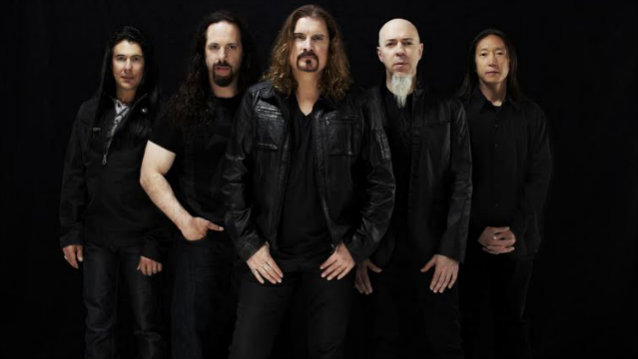 Progressive metal giants DREAM THEATER are collaborating with photographer Rob Fenn on a hardcover photo book documenting the North American leg of their “Along For The Ride” tour, which kicks off March 20. Fenn will be traveling with the band all the way from Toronto, Canada’s Massey Hall to Mesa, Arizona’s Ikeda Theater, shooting 23 shows in all, including the special March 25 performance at the Boston Opera House which will feature an orchestra and choir from Berklee College of Music. Proceeds from the sale of the book will benefit the F*ck Cancer foundation and Dying 2 Live.

“Being able to do a book project with an iconic and influential band such as DREAM THEATER is beyond a honor,” says Fenn, who’s previously shot limited-edition prints featuring KILLSWITCH ENGAGE’s Jesse Leach and SLIPKNOT and STONE SOUR’s Corey Taylor. “Cancer affects my life daily, so to be able to give back through my work on a project like this is a true blessing.”

DREAM THEATER guitarist John Petrucci says: “We were introduced to Rob’s work through Mark Abramson at Roadrunner. His photos are amazing and as soon as we found out about the cause, we were all immediately on board.

“All of our lives have been affected by cancer in some way and all of us have lost loved ones to the disease. This is a great way for us to be a part of the crusade toward finding a cure, and we are looking forward to working together with Rob on the upcoming North American tour.”

DREAM THEATER’s spirit of adventure and fearless musical virtuosity continues to reap dividends for the progressive metal titans who recently earned their second Grammy nomination, this time for “Best Metal Performance” for their single “The Enemy Inside” from their current self-titled album. The band — John Petrucci (guitar), John Myung (bass), James LaBrie (vocals), Jordan Rudess (keyboards & continuum) and Mike Mangini (drums) — received its first-ever Grammy nomination in 2012 for “On The Backs Of Angels” (from their “A Dramatic Turn Of Events” album) in the “Best Hard Rock/Metal Performance” category.