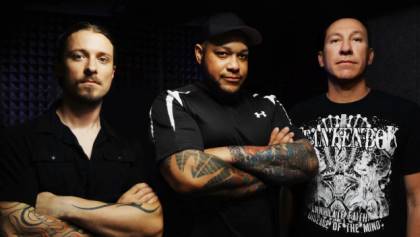 “Logan really pushed us and brought the best out of us and now Zeuss is making it sound amazing!”

Artwork for the album is currently being finished up by noted painter and illustrator Travis Smith (OPETH, KATATONIA, DEVIN TOWNSEND).

Said Jones said of the band’s new additions: “After a period of being so intensely creative writing and recording the album, it’s exciting to finally take it out on the road.

“It’s great to have the two new guys. Roy is a great fit. Ryan and I have played tons of shows together in BLEEDING THROUGH and KILLSWITCH and have known each other for years.”

DEVIL YOU KNOW will make its live debut on February 15 at Chain Reaction in Anaheim, California. The group is also confirmed for the 2014 edition of Australia’s Soundwave Festival, set to take place in late February and early March.