The halfway point of 2014 is rapidly approaching, garnering the ever-faithful “Where did the time go?” sentiment. It’s always the truth, ain’t it? One day you’re slogging through sub-zero temperatures (for us Northeastern-ers), then next, you’re building a stockade of sunscreen (for those without the benefit of hair). Regardless of the way one perceives the passage of time, 2014 has been rather the eventful year thus far, with plenty of variety and shades to go along with the deluge of releases we do our best to keep up with. Therefore, in order to process our thoughts on the year thus far, our “Halfway Through 2014” top-5 lists will be making an appearance on the site in a few weeks. Which album is going to get the most nods? Any guesses? – David E. Gehlke

General housekeeping
Kyle McGinn’s best-laid plans didn’t quite come to fruition while trying to review the Castevet/Thanifaxath show in Brooklyn. Click here to find out why.

The fine folks at Comatose Music are giving away two of their more recent releases. Click here to enter.

Our review face-off of the week: Obsequiae’s Suspended in the Brume of Eos.

Features
German female-fronted metallers Xandria have a new album, and a new singer in which to push. Diane van Giersbergen checked in with our own Matt Coe to give us the scoop.

Unsigned U.K. melodic death metal outfit Bloodshot Dawn have accumulated quite the amount of momentum heading into their second album. Singer/vocalist Josh McMorran was kind enough to bring DR up to date.

We’ve given plenty of ink to Insomnium of late, so it was only necessary for a chat with bassist/vocalist Niilo Sevanen.

Reviews
NOLA sludge masters Eyehategod are back with their first album in 14 years. Does it measure up?

German black/folk/avant-garde duo Dornenreich are calling it a day after the release of Freihet. Bridget Erickson details their swansong.

A new entry in the folk metal derby: Metsatoll, whose Karjajuht effort adheres to the basic tenants of the sound.

The sole purveyors of Star Wars-themed melodic death metal, Hoth are one of the best unsigned bands going, based on Oathbreaker.

Focusing solely on Crowbar after leaving Down, Kirk Windstein and friends turn in another no-frills, but wholly enjoyable heavy sludge effort via Symmetry in Black.

The news in ten
1. Watain to play special show in Brooklyn.
2. Unisonic post lyric video for “For the Kingdom.”
3. Mastodon discuss artwork for Once More ‘Round the Sun.
4. Behemoth forced to leave Russia due to visa violations.
5. Running Wild gets their own mead.
6. Testament frontman Chuck Billy confirmed as guest on the new The Haunted album.
7. Origin releases the lyric video for “All Things Dead.”
8. Yob to release Clearing the Path to Ascend this fall.
9. Judas Priest streams new song, “March of the Damned.”
10. Triptykon forced to cancel Maryland Death Fest appearance due to HR Giger’s passing. 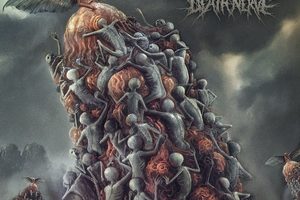