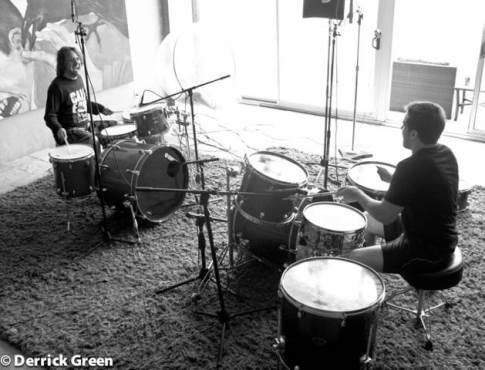 SEPULTURA have posted another update from the studio, where they are recording with producer Ross Robinson (KORN, LIMP BIZKIT, SLIPKNOT) at his studio in Venice Beach, CA. The album is tentatively due in October via Nuclear Blast.
Comments SEPULTURA guitarist Andreas Kisser: “Around noon of the 11th, Ross, Mike and myself started putting together all the guitar stuff. Before they dismantled the drums, Eloy took a photo shoot with our friend from Indonesia Pheren, a great photographer that lives in LA that we met at our last tour in Asia, great stuff. Drums out, guitar amps in.

“Ross still has the same guitar cabinet I use on Roots, a destroyed Marshall head that sounds amazing, it was used on albums by SLIPKNOT, MACHINE HEAD and KORN too. It does have a kind of a magic sound. Also I have a cabinet in the studio from a Polish company Lagoba. [It’s] really cool to have these options to record. For heads I’m using an Orange Rockerverb MK II that is simply the best plus two 5150 and a VHT, all sounding really good. We tried also a Vox, combo that Ross just fixed and it works perfectly, I can’t believe that we are creating such a heavy sound with an Orange and with a Vox, totally Sixties.

“We found the sound and I recorded one of the guitars. It’s fantastic to see Ross working with the pedals on the floor; he goes after the perfect sound for each part of the song. It’s a lot of fun. Before I finished the other guitar, Ross wanted to start with Derrick [Green]. He did some vocals on the track and he kicked ass! Derrick never sounded so good and powerful. Ross is extracting the best of all of us.

“Next morning we were preparing to record the second guitar when Ross received a message on his phone. He was really excited about it so he stopped everything to tell us what was going on: Dave Lombardo, the one and only ex-drummer from SLAYER, also plays with Mike Patton on FANTOMAS, was real close to the studio with his kids and his dog enjoying some time at the beach, Ross asked if he would like to come to the studio and jam something on our album and he said YES! We were so excited, we could not believe that one of our great idols was ready to be a part of our new album.

“He came and it was so nice, so special, so awesome! He is one of the nicest guys in business and he enjoyed the idea a lot. Ross and Mike prepared two drum sets on the living room, facing each other, no cymbals, just tribal drums! When the mics were all ready and running Eloy and Dave started playing and the magic was on, so great! The part they recorded will be a special part on the middle of one of the songs, it came out crazy!

“We just have to thank Mr. Lombardo and his family for this opportunity. Thank you Dave, we will never forget this, it’s a real honor to have you on the album!

“Well, the day was crazy after that, we finished the second guitar and did more vocals, long but a beautiful day. And this is how is going now at the studio, I start with guitars and then at the end of the day Derrick comes and scream his vocals, is working great like, something new for us since we always left the voice to the very end but we are loving the way things are running, we are very confident that we are doing something very special here.”