CRADLE OF FILTH To Release “The Curse Of Venus Aversa” Comic 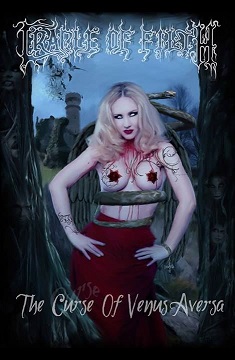 Comic books and rock n’ roll have crossed paths many times — from the ongoing adventures of KISS at IDW to Neil Gaiman’s collaboration with Alice Cooper in “The Last Temptation”. Now, British extreme metallers CRADLE OF FILTH have entered the fray with “The Curse Of Venus Aversa”. The 72-page “adult graphic novel” features a story by singer Dani Filth and New Orleans cult comic book author Kurt Amacker (“Dead Souls”, “The 69 Eyes: Helsinki Vampires”), who wrote the final script. It tells the story of a salacious Victorian poet who faces down authorities, hoards of vampires, an ancient goddess, and his own demons — all that, after the suicide of his lover Gabrielle.

The graphic novel is inspired by key selections from the Filth’s extensive discography and authors of the Victorian era, including Lewis Carroll, Bram Stoker, and Oscar Wilde, who appears as a supporting character and friend to the book’s beleaguered poet. Montgomery Borror (“Quarantine”) provides stunning black and white art for the book’s interior, with a cover by DEVILMENT album artist Jamie Huntley.

Fans of both music and horror comics can support the project at Kickstarter and pledge for a variety of exclusive and limited collectibles. While the book will be available following the campaign, early pledgers will receive an exclusive cover printed only for the first edition, along with a limited-edition print, t-shirt, and Dani Filth voodoo doll from Quarter Kids Handmade Dolls.

The graphic novel’s title is a play on the CRADLE OF FILTH track “The Cult of Venus Aversa”, and it reflects the story’s use of the band’s songs as a starting point — but not as a script to follow to the letter. Filth stated, “Early on, we played with the idea of following a few songs beat by beat, but this initial idea didn’t flow particularly well. We then decided to just play in a world inspired by the lyrics, but not wholly derivative of them. What we’ve got now is an exploration of a Victorian horrorverse where all the songs are true!”

Amacker is equally excited about the project, stating, “CRADLE OF FILTH literally inspired me to write about ten years ago. I love music as much as comics, and they’re one of the few bands that has truly influenced me. This is a dream project. I’m not a musician, so it’s an honor to contribute something to their legacy.” His first miniseries, “Dead Souls”, launched in 2008 from Seraphemera Books, with other miniseries and graphic novels that followed — including the comic tie-in for the Finnish “goth n’ rollers” THE 69 EYES.

The top contributors to the Kickstarter campaign will receive two extremely exclusive opportunities — a chance to appear in the comic itself, and a personal phone conversation between Kurt Amacker and Dani Filth. He remarked, “It’s an open and friendly chat. You can ask us whatever you like. But depending on how illicit the question, we may reserve the right to remain silent!”