CRADLE OF FILTH Reveal “Hammer Of The Witches” Track Listing

Long-running British extremists CRADLE OF FILTH have revealed the track listing for their forthcoming new album, Hammer of the Witches.

The album is due in July via Nuclear Blast. The cover artwork for the CD can be seen below.

Hammer Of The Witches track listing:

1. Walpurgis Eve
2. Yours Immortally…
3. Enshrined In Crematoria
4. Deflowering The Maidenhead, Displeasuring The Goddess
5. Blackest Magick In Practice
6. The Monstrous Sabbat (Summoning The Coven)
7. Hammer Of The Witches
8. Right Wing Of The Garden Triptych
9. The Vampyre At My Side
10. Onward Christian Soldiers
11. Blooding The Hounds Of Hell 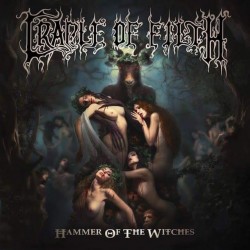