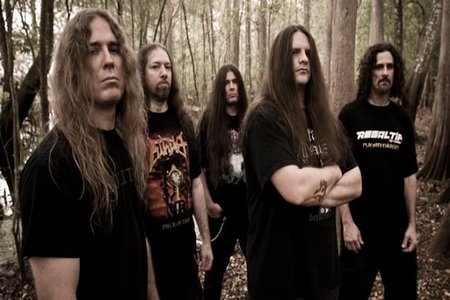 Prior to their February 7 concert at The Observatory in Santa Ana, California, Florida death metallers CANNIBAL CORPSE were presented with a plaque by Metal Blade Records signifying sales of more than two million of their thirteen studio albums to date. CANNIBAL CORPSE released their thirteenth album, A Skeletal Domain, on September 16, 2014, and debuted at #32 on the Billboard Top 200.

The band is currently on a co-headlining trek with BEHEMOTH. Remaining dates can be viewed below.