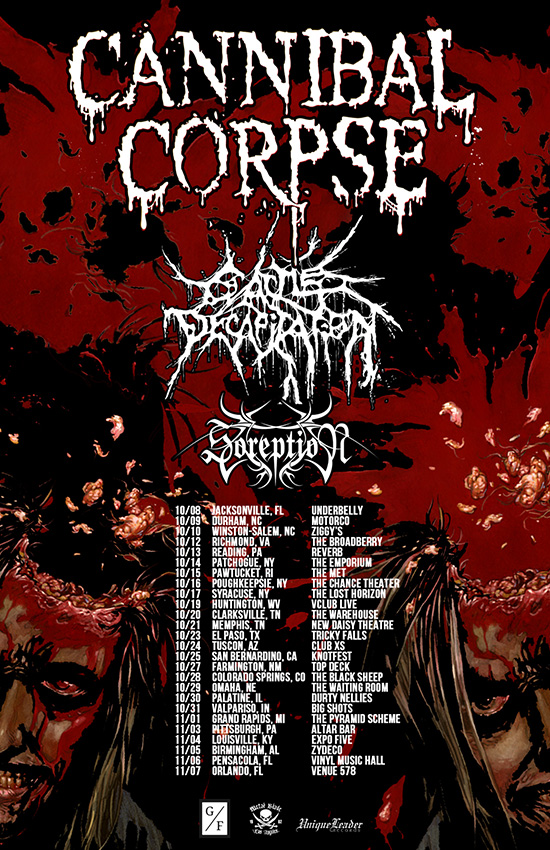 CANNIBAL CORPSE has spent the summer of 2015 conquering Europe, with included stops at Hellfest, Wacken, Bloodstock, Brutal Assault, Party.San, Copenhell, Graspop, and numerous club shows. But they aren’t even close to being finished with 2015. The band today reveals their plans for a massive US tour this Fall, bringing a brutal package of acts with them across the United States beginning October 8th, and running through November 7th. Direct support is slated to come from Metal Blade labelmates, Cattle Decapitation, preceded by Sweden’s Soreption, plus a local opener on each show. Tickets go on sale Friday, August 14th. VIP upgrades will be announced soon. Check cannibalcorpse.net for details as they are made available.

Comments CANNIBAL CORPSE bassist Alex Webster: “We’re very excited to be hitting the road this Fall with Cattle Decapitation and Soreption, two killer bands that we know our fans will love. Get ready for a night of complete brutality!”

Cattle Decapitation vocalist Travis Ryan expresses the band’s excitement for the upcoming shows: “We’ve wanted to tour with CANNIBAL CORPSE ever since we started touring and we’re glad that’s finally going to be a reality! Looking forward to making memories with these guys and Soreption!”