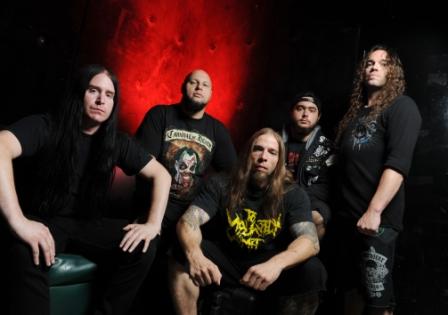 Veteran death metallers BROKEN HOPE have posted a new song, “The Docking Dead” and is available for streaming below. The song is from their upcoming album Omen Of Disease, to be released on October 1 via Century Media Records.

Guitarist Jeremy Wagner states: “I began penning words for BROKEN HOPE 25 years ago, and my approach has never changed… I still create the most horrific, insane, and repulsive lyrics my mind can conjure. ‘The Docking Dead’ is no exception to my long list of nasty flash-fiction. Many of my ideas start with a “what if” scenario. In the case of ‘The Docking Dead’, I asked myself, ‘what if a Re-Animator-like scientist attempted to harvest human foreskins from male corpses using an experimental re-agent and growth hormone – and in doing so, he started a zombie apocalypse?’ That’s all I needed to write the lyrics to this song. Zombies, dead penile tissue, death metal, and grind are what’s in store when you hear – and read – our newest preview song, ‘The Docking Dead’.”

As previously reported, BROKEN HOPE also have another new song “Ghastly” at this location.

Wagner comments: “I’m really excited to have ‘Ghastly’ released as a free download for the world – our gift to you. I have to say, ‘Ghastly’ is one of my favorite tracks from the Omen of Disease album! As I wrote the music on this song, I took riffs I’d been saving for a while, combined them with new death metal ideas, and sewed the whole thing together to make for one of our sickest and most relentless musical tracks. Lyrically, I wrote about an unfortunate person who was born so physically repulsive from head-to-toe/inside-and-out, that the mere sight of the hideous form could almost blind and nauseate you. Like a Gorgon, but even more horrific. Hence the line: ‘Ghastly…a horrid blight upon the eyes.’ With ‘Ghastly’ and ‘The Flesh Mechanic’, I think these tunes will give everyone a good idea of what to expect from the entire Omen of Disease album. Enjoy!”