BROKEN HOPE Issues Update On Fan That Was Injured At Show 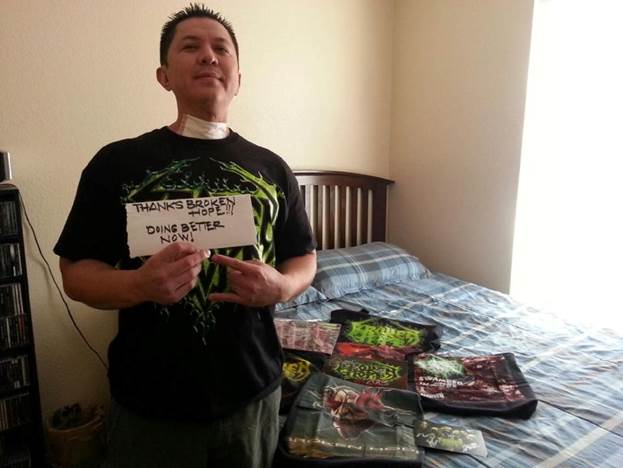 At a recent BROKEN HOPE show with DEICIDE, a fan was horrifically attacked by a maniacal concert-goer with a box cutter. The injured fan, Julio Serrano, had his throat slashed during the band’s set and was immediately rushed to the hospital. Numerous media outlets reported on the status of Julio, and BROKEN HOPE can now issue an accurate update on the progress of their most hardcore of fans!

Right after the incident happened, BROKEN HOPE rushed Julio Serrano a special care package in the hopes that the gifts would brighten his spirits. Julio responded recently with an update that he received the package and he is doing much better now. See above for a happier and healing photo of Julio!

BROKEN HOPE states: “BROKEN HOPE sent a special BH care-package to JULIO SERRANO– We wanted to lift JULIO’s spirits and let him know we genuinely support and care about him. If this photo says anything, JULIO SERRANO is doing much better! Cheers and the best of health to you, JULIO!!!”