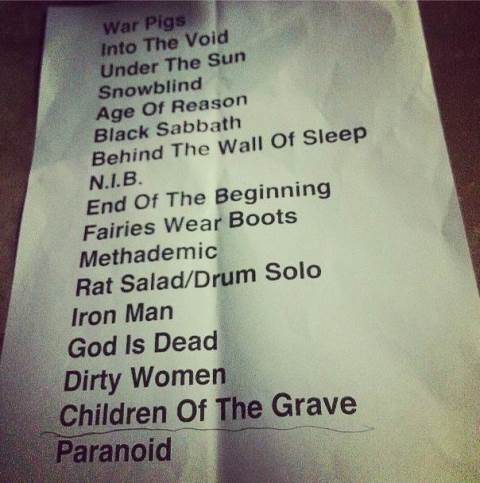 BLACK SABBATH kicked off its 20-date North American tour last night at the Cynthia Woods Mitchell Pavilion in The Woodlands (a suburb of Houston), Texas. Fan shot video of BLACK SABBATH’s performance has surfaced is available for viewing below, in addition to the group’s setlist for the night.

13, the first SABBATH record since 1978’s Never Say Die!, featured original singer Ozzy Osbourne, along with guitarist Tony Iommi and bassist Geezer Butler and was released on June 11. It’s their second attempt at creating new music together after a previous effort that failed in 2001. The latest release does not include the stylings of founding drummer Bill Ward who has sat out the reunion over contract issues. Brad Wilk of RAGE AGAINST THE MACHINE manned the drums on 13, while Ozzy’s solo drummer Tommy Clufetos is behind the kit for live work.