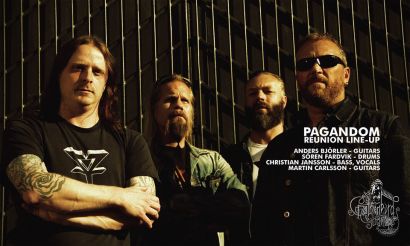 Guitarist ANDERS BJÖRLER (AT THE GATES, ex-THE HAUNTED) has announced he will be taking part in Gothenburg thrashers PAGANDOM’s reunion show in January.

Says Anders: “I am happy to be a part of Pagandom’s reunion show at Gothenburg Sound Festival in January 2014. Pagandom was a thrash metal band from Gothenburg formed in 1987, which had a huge impact on the local scene in the late 80s/ early 90s. This is pure nostalgia on my part.”

Björler has set November 6th as the release date for his debut solo album, Antikythera, via IN FLAMES frontman Anders Fridén’s Razzia Notes label. Antikythera focuses around his love for Italian movie soundtracks from the 60’s, 70’s and 80’s and adds a healthy dose of English prog rock, jazz, post-rock and a pinch of Swedish folk music. Anders Björler has recorded an album that paints pictures in your head, a kind of music best listened to with your eyes closed. The sounds might even take you all the way to the Greek island Antikythera in the year of 1901. That is when a diver discovers parts of an antique analogue computer, dated to around 87 before our era. This is the kind of magical travels that Anders Björler offers with his music. If the recordings he did with At The Gates and The Haunted was a perfect warm-up to a night out this is the big exhalation, the day after. It is a time for reflection.