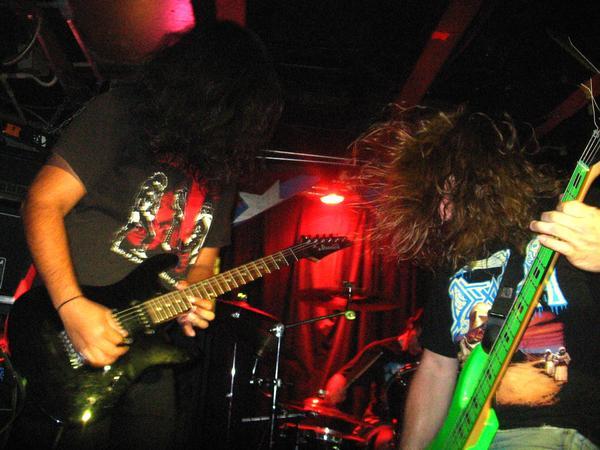 As with so many others, my flavors of the week vary all too often, so I won’t bother with explaining how I like all kinds of music (although I suppose I just did). Basically, if it’s got electric guitars and isn’t on the radio, I’ll probably find something to like about it. Here’s what I’ve been spinning lately:

1. In Solitude – “Pallid Hands”
I’m mildly obsessed with this band, and practically everything that comes out of Scandinavia. Sister is hands-down my favorite album of 2013, and has obviously been receiving all kinds of due hype. In my opinion, this is the best track off the album and may quite possibly a perfect song. From the get go, it has just about everything I’d want from a heavy rock/metal song: the riffs are great, the solo section is phenomenal and very Maiden-esque, and the song is catchy enough without being campy or trite. Pretty sure I’ve listened to this song just about every day since it has come out. Put this album on when you’re driving alone late at night and let it take you away, man.

2. Vastum –  “Enigma of Disgust”
This is a stellar mid-pace death metal ripper off another great 2013 release, Patricidal Lust. My buddy Beau Brandon from Withered introduced me to this band some time ago when their first album Carnal Law had come out, but I admittedly only really started digging them once I heard this record. This song and record is a prime example of how sometimes less truly is more, of where there is just enough shred to translate into fun groovy death metal. Vastum reminds of a band that Spewtilator or my other band Mangled would play live with, and this record definitely has a “live” feel to it- really big crunchy guitars, and an up-front, washy sounding hi-hat. I defy anyone to not start headbanging from the 1:24 mark on.

3. The Hellacopters –  “Crimson Ballroom”
When your band history includes Entombed, the Hellacopters, Death Breath and now Imperial State Electric (among others) you can truly do no wrong. Nicke Andersson is that man and has been my rock idol for years now. Not only did Clandestine singlehandedly get me into death metal, the Hellacopters have released some of my all time favorite rock records (in the 90’s and 00’s no less). This track is off of a compilation of B-sides and covers titled Cream of the Crap Vol. 1 and is pure retro-rock worship of the highest order. The fact that this was a B-side of theirs is testament enough to the caliber of music these guys were putting out.

4. Enslaved –  “Fusion of Sense and Earth”
The third Scandinavian band on my list (I wasn’t lying earlier). Enslaved is one of the few bands I always have in rotation; it’s quite literally a different album of theirs every week. Lately, it has been the classic, Ruun. This is probably the most aggressive track on the record, though it still maintains enough of the prog-elements and amazing songwriting/musicianship Enslaved have become known for. I really can’t think of many bands whose entire discography I enjoy from front to back, but Enslaved are one of the few.

5. Rainbow –  “Stargazer” and “A Light in the Black”
Classics are classics for a reason. 70’s and 80’s hard rock and heavy metal will always be my favorite music, and Dio-era Rainbow has always been one of my favorite bands from that time. I finally scored Rising at a garage sale recently and may never buy another LP ever again. These two songs infamously comprise the entire B-side and ought to be listened to back-to-back to understand the full narrative, hence why I included them both. Long live heavy metal, long live rock n’ roll, long live Ritchie Blackmore, and long live Ronnie James Dio (RIP).

Spewtilator’s 2013 split with Coffin Dust, Ancient Rites of Getting Conjured, was released in 2013 via Headsplit Records. For more information on the band, head over to their Facebook page.