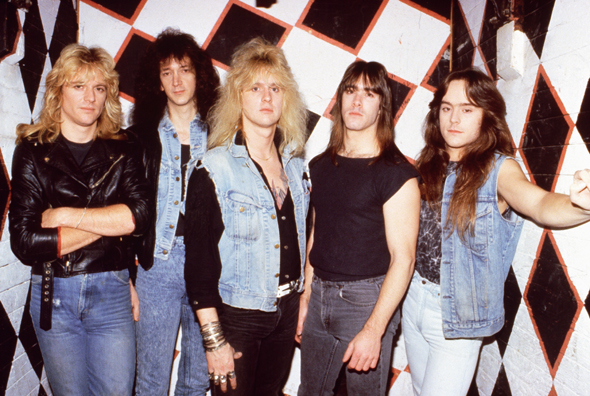 ANNIHILATOR guitarist Jeff Waters has checked in with the following update on April 18th:

“Twenty-five years to the day since ANNIHILATOR’s Alice In Hell was released! Man, how time flies! Lots of happy, fun (and shitty!) memories about that time and the couple of years prior to it’s release, but all in all I view that record as a great introduction to our newly-signed metal/thrash band. Lots of people helped me put that together (too many to name but of course the guys in the band, then, and previous demo lineup… and John Bates/Jody Weil, who co-wrote some lyrics with me, and Monte for believing in me then)! Thank goodness I didn’t sell that ‘Alison Hell’ song to Brian Slagel at Metal Blade Records! He had sent me a contract, offering to buy the song outright for one of his artists LIZZY BORDEN for $2000!

Although we were labeled as a thrash band then, I was very proud of the fact that the Alice record started with a classical guitar piece (‘Crystal Ann’) and then into the song ‘Alison Hell’ The latter was not a thrash metal song, it was a slow, melodic, metal-riffing tune! Thanks Alison! Interestingly enough, my favorite record and the biggest seller from Annihilator was the next one Never, Neverland.

While I am not going to do anything special for the Alice anniversary, I/we might do something next year for Never, Neverland; some cool ideas kicking around! For now, we will just tour the world, play the coolest festivals, to the coolest people this summer, and make studio cd #15. Rough life! Hehe!