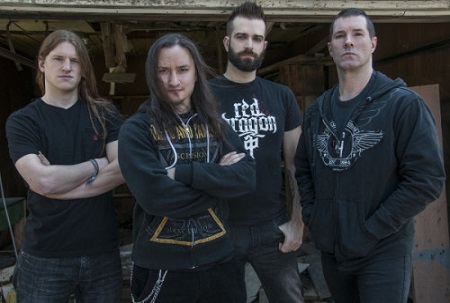 “After the show in Madrid [Spain] last night, we left at night for Barcelona. Jasmina [Vrcko, Jeff’s fiancée] and I were sleeping in the master bedroom in back if the bus. We were thrown on the floor, as a truck slammed into us from behind. The other guys were mostly sleeping, but were woken up with quite the impact. We (red car bus) were driving the speed limit for carrying a legal 3.5 ton trailer and, according to the Spanish police who shut the highway down, the driver of the truck that hit us was speeding and ‘distracted’; I would guess texting, as he was speeding at a high rate down a 3-lane highway in the slow lane, and tried to brake a second before impact…

“So it looked the entire police force was out! Very cool dudes and they helped us arrange tow trucks, checked for injuries with all vehicle occupants, escorted the bus to a truck stop when we finally untangled the trailer from the bus. Our bassist, Alberto, speaks Spanish and translated all night, then morning long.

“We were all very lucky we had a large trailer, stuffed with a lot of backline (stacks of Hughes & Kettner Coreblade speaker cabinets saved us!!)… They and ALL our gear took most of the impact… The police said we would have likely had fatalities, if that trailer and cabinets/contents had not been there… Jas and I would have been the first to go!!

“But enough drama! We are all OK.

“We had a killer show in Madrid last night.. Best show and fans on the tour… But sadly and obviously could not make Barcelona tonight. We are (safely and legally!) racing to Lyon, France now, where we will get a truck for the gear (gear in way from accident location).

That could be the only issue now is what gear/equipment is working and what is destroyed. But we will likely make it to Lyon and sort out what we can use there!!!

Thanks Madrid, sorry Barcelona, ‘F you’ to texting and driving (or whatever he was doing)…

“Oh, about the driver of the speeding truck that hit us: He survived, but if you saw his truck, you would not think it possible to survive.

“Wish us safe travels! We need them!!”

ANNIHILATOR’s 14th studio album, Feast, was released on August 23 in Europe and August 27 in North America via UDR.