HELLOWEEN lead singer Andi Deris has posted the studio video for “Banker’s Delight (DOA)” from his BAD BANKERS project. “Banker’s Delight” can be streamed via the YouTube below, and comes from the band’s Million Dollar Haircuts On Ten Cent Heads debut, which will be released on November 22nd via earMUSIC.

Written and composed by Andi Deris himself, Million Dollar Haircuts On Ten Cent Heads has a crispy, modern sound to it. The diverse, high class production is snotty, dirty and brutally honest. A healthy mixture of the recent sounding HELLOWEEN records combined with Master Of The Rings tradition (Andi´s first HELLOWEEN’ fronted album) and it features some extra ordinary JIMI HENDRIX-like guitar sounds.

Recorded together with his band BAD BANKERS, Andi Deris criticises the grievances of the economic system and its corruption. Although the topic may seem a bit dull, the heavy guitar riffs and Andi Deris’ recognizable voice clearly make a point: “f*ck banks, f*ck managers, f*ck bankers”.

Explains Andi Deris: “Obviously we despise everything around banks, managers and bankers who are clearly responsible for the shit that goes on nowadays (and most certainly in our future), so it felt very good to vocally tell them what we think about them. Sure, therefore it´s highly explicit but hey… who gives a f***. That’s what they deserve… and it helps the music to really kick some ass.” Who would have thought that a bank crisis could result in something like this? 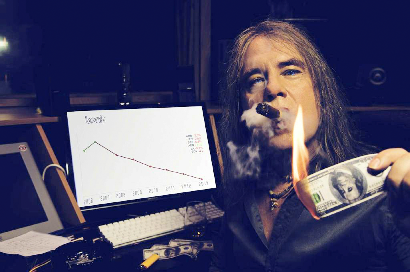