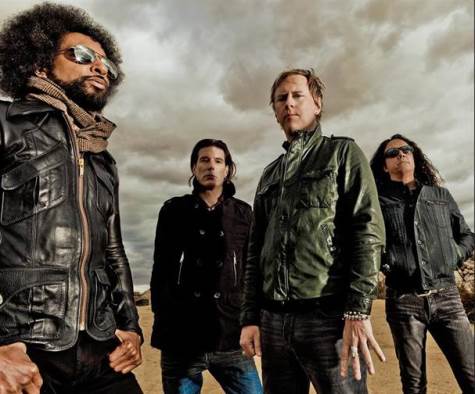 The official lyric video for the latest single “Stone” from ALICE IN CHAINS may viewed below. The track has also been made available as an instant download when you pre-order ALICE IN CHAINS’ new album, “The Devil Put Dinosaurs Here” on iTunes. “Stone” precedes the album’s successful first single “Hollow”, which struck #1 on mainstream and rock radio charts. Their new album was recorded in Los Angeles with producer Nick Raskulinecz (FOO FIGHTERS, DEFTONES) and is due out on May 28. “The Devil Put Dinosaurs Here” follows up 2009’s “Black Gives Way To Blue”, the group’s first all-new collection of material in 14 years and first since the 2002 death of original singer Layne Staley and is ALICE IN CHAINS’ second with William DuVall on vocals.

ALICE IN CHAINS guitarist Jerry Cantrell recently told Rolling Stone that the effort is “a unique record that’s completely different from anything we ever did,” going further to add that, “The band is moving ahead in new territory that we haven’t been to before, but we haven’t lost our identity.” Cantrell was asked by The Pulse Of Radio to talk more about the group’s growth on its fifth studio effort. “The cool thing about the record is it’s a snapshot of time, of that group of individuals and when you line up all of those records back to back, you can see where the band changes, evolves, you can maybe feel what they’re going through, you know, and I think you could probably say that with all of our records. You can get a pretty good snapshot of what’s going on there and, you know, we’re in a different place now.” He went on to share with Revolver Magazine that the title track’s lyrics take on the convictions of certain organized religions, asserting, “What I’ve seen is the most basic message to most faith systems is in contradiction with how it gets applied. It always amazes me that some of the most hateful and hurtful things are done in the name of some sort of belief system.”

ALICE IN CHAINS will hit the road starting April 25 in Miami Beach and includes headlining slots at the “Rocklahoma”, “Carolina Rebellion”, “Welcome To Rockville” and “Rock On The Range” festivals.

ALICE IN CHAINS To Become Extinct After “Dinosaurs” Release?