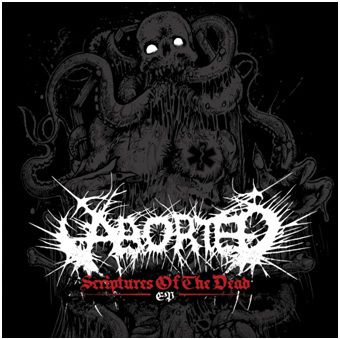 In support of ABORTED’s upcoming studio album The Necrotic Manifesto, Century Media Records are announcing the release of the special 7″ EP, Scriptures Of The Dead. This EP is worldwide limited to only 500 copies and will exclusively be offered on the band’s upcoming North American tour (see tour dates below).

Side A of Scriptures Of The Dead includes the title track of the new album while Side B offers a ferocious cover version of SEPULTURA’s classic tune “Arise.” This track is not going to be offered on any other physical format.

Mastermind Sven de Caluwé comments: “Since we have our new album coming out right after our North American tour with KATAKLYSM, we thought we would offer the fans an exclusive opportunity to get some new music before the release of the album, therefor Century Media and yours truly came up with a devious plot to release a very limited 7” that will be on sale on tour containing one new track Necrotic Manifesto and an exclusive cover track from SEPULTURA’s ‘Arise.’

“Now if that’s not the extra incentive you all need to come get your faces melt off on the east coast extirpation dates or the kill the elite tour, I don’t know what is! (Besides maybe cheesecake). If you don’t live anywhere near where we will be touring, worry not, there will be a very limited amount of this 7″ available on our online store and CM distro. Check out the tour dates below and come say what’s up to us at the merch stand or the bar! Grind!”