Watain – Where Dark and Light Differ 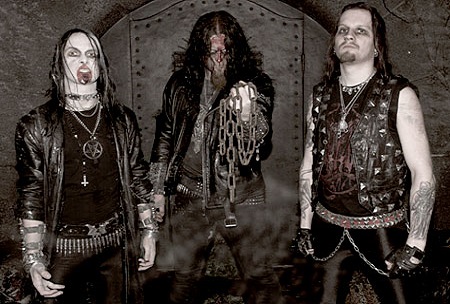 How Watain hasn’t got lost in the black metal (truffle) shuffle is a bit stifling. Considering their auspicious and deadly Casius Luciferi album hit right around the time (2002) when basement BM (Xasthur, Leviathan, et al) was all the rage, compounded with their Dissection-happy sonics, and augmented by their overtly Satanic message, the Swedes seemed destined to play out the string in a sea of mediocrity. Yet the chips didn’t fall that way. A groundswell soon developed for the band, culminating in their ever-popular Sworn to the Dark release in 2007, of which made Watain the global black metal “it” band for that year. Founding member/vocalist Erik Danielsson soon became a sounding board for Satanic rhetoric and subsequent tours merely added to the fervor around the band…must have been the blood thrown on the audience, eh?

Operating with a different set of demands, Watain returns with Lawless Darkness, which to these ears is a more well-rounded and versatile effort. Sure, the Dissection slant is still present, but so are some early Bathory antics, merged with a reckless, ahem…devil-may-care attitude. It all coalesces nicely into what could be Watain’s finest hour and with the big boys of black metal sitting on the sideline, there is no time like the present for Danielsson and crew. We caught up with the passionate frontman for a discussion on the band’s standing in the black metal scene, the success of Sworn… and how he’s adjusting to a thing called “expectations.”

Blistering.com: The hype, buzz, hoopla, etc. that now surrounds Watain – you have to be aware of it, so does it inspire or detract from the creative process?

Erik Danielsson: Well David, I must say it does neither. We live in our universe, how other people perceive that is getting more and more irrelevant as time goes by. The minute we start to focus on the filth outside the Temple of Watain, we’d be on the wrong path.

Blistering.com: Isn’t it a double-edged sword to be popular and/or commercially viable in black metal? How do you plan on dealing with this?

Danielsson: Well, having the previous answer in mind, you probably understand that what we are doing with Watain remains unaffected by such things. What should I bother if our album is sold at Wal-Marts instead of only at Dark Realm Records in LA? My altar will still be alight in the honor of the Devil, and so will Watain. It will always be wondrous to me to see how far we can actually take this while still openly doing the work of the Devil. But on the other hand, the world is plunging into chaos, deeper and deeper for each day, and it is not strange that the currents of the world are changing to our direction.

Blistering.com: The band has no gimmick (i.e. keyboards, hot chicks, etc.) and while there are tons of bands that play black metal in your vein, what makes Watain more convincing, even more genuine than most?

Danielsson: The difference is obvious, and rather simple, if one has ears and eyes to hear and see. The gimmick bands that you mentioned are doing this as entertainment, just like any horror movie director. Polanski was not into Satanism, he just used it in Rosemary’s Baby because he was fascinated by the subject and thought it would make for an interesting movie. The only difference between him and the clowns of these bands is that he actually managed to make something interesting and long-lasting, while the “art” of Dimmu Borgir will only appeal to 14-year old kids, and be remembered by none. I do not oppose using Satanic topics in entertainment, the Devil has since the 1700s been a frequent visitor in western popular culture, and often with great result! But Black Metal to me is far more interesting when it is genuine, and intentionally working for the benefit of its Main Character.

So, with this in mind, obviously the difference between “us” and “them” should be achingly clear. Watain is a collective of wild souls on a hunt for the lawless darkness, a pack of wolves who happen to be musicians and true artists. Our art is permanently linked to Satanism, lawlessness, sorcery, violence and true fiery passion. Because these are the virtues of the Devil. And we are his children.

Blistering.com: There was anticipation for Sworn to the Dark, but it pales in comparison for Lawless Darkness. Initial listens suggest it matches up, but for you, where does it stand in the Watain pantheon?

Danielsson: Every craftsmanship demands time and dedication in order to reach the result intended. We have worked for 11 years as a band to arrive at the point where we feel more free than ever in our ability to create exactly what we want. With the previous records, we had begun to build a castle, and on Sworn to the Dark we had reached far, a great structure had been risen and within it the beginning of many giant halls and small chambers. On Lawless Darkness, this structure has developed into a far greater work; you can now see the great towers rising towards the heavens, you can see shapes of abominations through the ornate windows, there are fires burning outside the giant iron gates and in the vaults below the winding stairs, activities are taking place that best remain nameless…

Blistering.com: Sworn to the Dark was a colossal success across the board. Now that you’re three years removed from it, can you fully gauge the impact it had on your career?

Danielsson: I don’t know, I haven’t thought much about it. The impact it had on us however, as its creators, was huge. It made us much stronger and more determined as a band than we were before. I guess such is the consequence of most great art upon its makers.

Blistering.com: As for Lawless Darkness, it’s more unrelenting that Sworn. Was that the initial goal?

Danielsson: Unrelenting is a terribly broad term to use in this context I think. However the word “more” is perhaps more relevant. Lawless Darkness is indeed more than Sworn to the Dark; more satanic, more sinister, more epic, more detailed, more metal… I wouldn’t say it was a goal, but it was a natural process for us as artists to go in a direction that allowed a richer result.

Blistering.com: I’ll vouch for “Wolves Curse” and “Total Funeral” as my favorites, but for you, which songs have left the most lasting impression on you?

Danielsson: Yes those are good songs, I agree. Perhaps the most traditionally “metal” in a way. If I have to pick one, I would probably say “Waters of Ain.” To me, that is the crown of the album. But then again, there is not one second of the album that I actually don’t like.

Blistering.com: Do you think North America’s main impression of black metal (read: Dimmu, Cradle of Filth) can be changed by a band like Watain?

Danielsson: Yes, and we already see it happening. Then again, this is not a fucking popularity contest, if people want to spend their time on that kind of crap, then fine. It weeds out a lot of people we’d rather not have anything to do with. But I honestly think that people are a bit fed up with plastic things, especially in the US, and that is why I think Watain is getting a lot of attention, because we are genuine in that sense. I myself always preferred a bloody steak before a Big Mac, and I think most people into metal do.

Blistering.com: Obviously, there are some parallels between Watain and Dissection. Can you describe what Jon [Nodveidt] meant to the band?

Danielsson: We worked closely together during the years after his sentence until his departure. He was one of the few real artists that I met, a true warrior and a free spirit. Those years were a very inspiring time to say the least…

Blistering.com: In a way, do you see Watain carrying his legacy?

Danielsson: Yes, in a way we will always do that.

Blistering.com: Finally, what’s in store for the rest of 2010?

Danielsson: Well, after the release of the album we will be touring more or less constantly, worldwide. I cannot say how much I look forward to finally be on the road again, spread the iron wings and raise some serious hell…

But first of all, on the 7th of June, Lawless Darkness shall be released. I want to take the chance here to encourage all our true supporters to celebrate the release in their own way; any act of terror in the name of Watain is welcome! Burn something down, desecrate holy monuments, paint our name with blood on public walls, perform suitable rituals, and act through the will of Satan! The release of this album shall mark a new era of Watain, and we look forward to joining forces with the free spirits and lawless ones that has harkened our call.