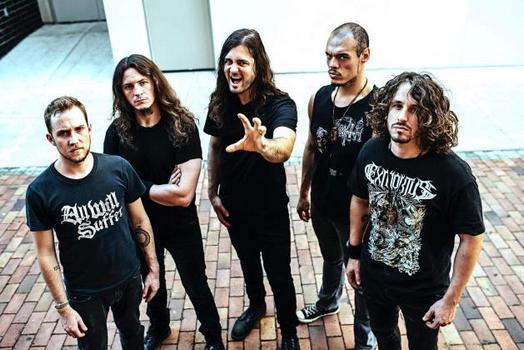 Dead Rhetoric: Do you have younger bands coming up to you and asking you for advice because of the longevity of Warbringer – and if so, what things do you talk to them about?

Kevill: We’ve gotten that for a while. If you play a show, and someone’s local band opens for you, they are probably at that show because they wanted to be. We know what that scene is like – I remember being taken advantage of by promoters, used to take the fall on pay to play and all that. Those arrangements aren’t unique to Los Angeles, as I found out. It’s a long fight, you have to have a vision and stick to it. You have to have something different that makes your band stick out from the sea of other metal bands. To find that in our band, we reached inward not outward. There are things about us as people that make us different more so than what we listen to.

It’s a struggle, be tenacious. You have to find of team that shares a culture, a purpose. It’s hard enough with a shared goal, without it, it’s impossible to get a band all on the same page. The other thing I’ll tell them – and this is more aimed at very new bands, is rehearse for a long time before you ever play live. When you do play live, make sure that people remember it. I think that’s very important. In the very local scene, they rush to a live performance when I think they would be better served spending a year or two rehearsing and when they make they live debut, having people say, ‘where the fuck did these guys come from!’. That’s a better impression compared to learning the ropes in front of everyone, and then slowly making it better.

I’ll tell musicians too about specific things to make the live show good. One thing that newer bands don’t work on is the stage banter between songs. If you can play the songs competently that’s good- but often, the difference between a veteran band and a novice band, when you watch the way they handle themselves between the songs. It’s the between stuff that no one really coaches you on, or the fear of being in front of people makes you feel funny, that’s a tough thing to manage.

Dead Rhetoric: Tell us about the idea behind the Firepower Kills skateboards – as it’s a great way to cross-coordinate two passions and probably appeal to some new people in the process? What company did you work with to get this merchandise piece in place?

Kevill: This was done in October. This gentleman was making skateboards for Napalm Records – and he made it. That’s one of the wonderful things about working for a label, they’ll reach out and set up stuff like that. I would have never have even thought of this.

Dead Rhetoric: How are you personally handling this pandemic/quarantine downtime? Especially with you finishing your history studies in college, does it have you studying more of the history of pandemic issues of the past so that we can better understand how to handle things properly today?

Kevill: I did read up a bit on the Spanish flu, which is the closest thing we have… we are not there yet in scale, and hopefully we don’t get there. Coronavirus is flu-like in a way, the symptoms will resemble more common diseases. The added challenge is less treatable with the potential lethality added on. There are similarities there. I haven’t read about pandemics specifically – but I have been doing some reading, some of it history, some of it literature. If you read old literature now, you are crossing your streams.

One of the 19th century Russians I just finished Fathers and Sons, Ivan Turgenev, it’s about the generational divide in old Russia. A lot of deep stuff about life and the human condition. Now I’m doing a chapter on the Eastern Front in the first World War – a comparison regarding Russian and Austrian weapons and what the firing properties of the different rifles were. Reading up on a bunch of things- I finished my degree in the summer, and I’m going to go for my master’s degree after this album cycle. I’ve had plenty of time to screw around with PC games – the new Doom is really fantastic. I really liked it, I watch movies on Netflix. My wife and I have learned how to cook all kinds of stuff. I got really good… I have a cast iron wok, a Chinese frying dish. I’ve learned you can use that outside on a charcoal grill, and do chow mein and broccoli beef really well. It’s been oddly leisurely, but the sense that you can’t leave is even stranger in and of itself.

Dead Rhetoric: What would surprise people to learn about John Kevill the person away from his work in Warbringer in the studio and on stage?

Kevill: I don’t know if people would be surprised, but I’m really a silly and jolly person. The person I am on stage is an aspect – a version of me that is cynical, sarcastic, and angry about everything because the world is going to hell. What people might not expect is I like to make a stupid joke out of everything – I’ll analyze stupid little things about a piece of entertainment. The thing with figures of entertainment is they are playing one aspect of their character. I act nothing like my vocal persona most of the time. In a lot of cases, Warbringer is an outlet for me to be more of a calm, serene, and jolly person by exorcising all of my demons so to speak. Even among the fans, I’m starting to develop a reputation for being a nice guy – and I enjoy that. I hate to hear when people are snubbed by their fans – it happened to me by Abbath when I was in Warbringer. I like his songs a lot, but I want to be the guy that can be as nice to my fans as I can. It’s a mission of mine, you won’t make every person like you, but you can be kind and thankful to the fans when they tell you they like the show or the band. Simple stuff.

Dead Rhetoric: Where do you see the state of heavy metal stateside and worldwide currently? What changes (if any) would you make for the benefit of the scene as a whole?

Kevill: One of the things I enjoy about heavy metal is the sheer depth and diversity of modern recording, production methods. The barrier of entry to make a record is lower than it’s ever been. You can do it yourself if you have the skills, the time, and the desire to find out the skills you don’t already have. It can be daunting to be in that in a competitive marketing sense. On the other hand, some of the metal trends that the metal mainstream has embraced are kind of silly. I describe it often as you can’t get anywhere without some damn costumes and keyboards. It’s easier to sell something based on… a pirate, Viking, a certain gimmick, Satanic. It’s about that, not the individual songs on a songwriting level, it’s more about how the schtick, and how you can make people say ‘hey, hey’ in a festival setting. I think in the Europe scene especially – I always thought of metal as Rust in Peace, Powerslave, vicious songwriting and each song is its own story.

I scratch my head at the runaway popularity of this – you guys aren’t here for the same reasons I am. There is a ton of great music being put out. I don’t think there’s any main subgenre of metal that is really dead, like thrash might have been in 1995. The sheer volume of records coming out – worldwide. There is not a geographic barrier anymore.

Dead Rhetoric: What’s on the agenda for Warbringer over the next year or two to push this release?

Kevill: I don’t want to repeat myself too much. The most common topic we have is warfare – but we try to take different angles, different approaches to it. I want to write different ideas all the time, to keep the sense that I’m an artist. We aren’t going to write anything for a little while. I’ve been doing a slew of press, interviews up the wazoo. We will put out new media – I’ve taken an active role in some of the visual stuff we’ve done. We will have a lyric video for “Glorious End”, and I found all the pictures that went in it. A lot of design work for the merchandise.

We are starting to see some reviews come in, and they are generally very positive. 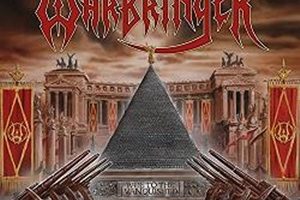