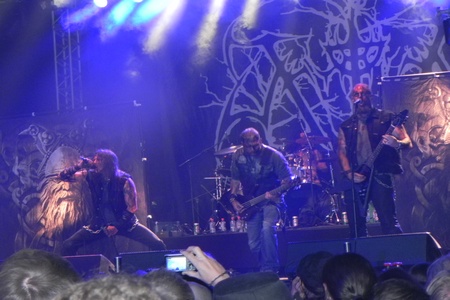 Ever since Bloodbath’s debut performance at Wacken in 2005, I’ve waited to see the death metal masters. The band had 1 hour and 15 minutes to bludgeon us with their raw, dirty, grinding old school Swedish death dominance and they used the time wisely to execute a 13-song set that spanned their discography.

Opening with a one-two punch from Grand Morbid Funeral with “Let the Stillborn Come to Me” and “Mental Abortion,” Bloodbath decimated the Wacken faithful with death blows of new and old alike. “So You Die” and “Breeding Death” followed from the band’s early period before returning to Morbid Funeral with “Anne” and visiting Nightmares Made Flesh and the Unblessing the Purity EP, with “Cancer of the Soul” and “Weak Aside,” respectively. The Fathomless Mastery was also represented with “Mock the Cross.”

Bloodbath has had the opportunity to work with some of the best in the business when it comes to death metal vocalists in Michael Akerfeldt and Peter Tagtgren, but it was Nick Holmes’ turn to take the mic. Everyone has their favorites, but I enjoy the work each did with Bloodbath, so I have no qualms with Holmes stepping in to the role for the latest album and touring cycle. His guttural bellows leave no doubt Bloodbath made the right decision to carry on with Holmes at the mic. With Opeth performing at the festival, it would have been nice to see Akerfeldt sing a couple songs. Although that didn’t happen, Bloodbath had a special surprise in store for the finale of “Eaten,” which featured original Bloodbath drummer, and later guitarist, Dan Swanö on lead vocals.

Sabaton are known for putting on energetic live shows, their bombastic power metal perfectly suited for the live arena, but nothing could have prepared us for what the Swedes had in store for Wacken. Working their way up the ranks of the festival over the years, having debuted on the Party Stage in 2008 and graduated to the True Stage in 2013, Sabaton were clearly excited to now be headlining the Black Stage and they brought all the bells and whistles (and panzers!) for the occasion. What followed was one of the most all out enjoyable, energetic and exceptional performances of the festival!

As the sun began to set, Hannes van Dahl took his position behind the drum kit, which was perched atop a panzer tank. No sooner had the last notes of instrumental intro “The March to War” faded away, flame cannons shot forth from the front of the stage while flare-like bursts erupted from the tank, as Joakim Brodén, Pär Sundström, Thobbe Englund and Chris Rörland joined Hannes on stage and launched into the perfect set opener “Ghost Division.” “To Hell and Back” and “Carolus Rex” soon followed, sending thousands into jumping fits and coordinated hand-claps. It wasn’t long before the requisite “Noch ein beer” (one more beer!) chants erupted, something that always happens to the band whenever they play in Germany. And this would humorously continue throughout the set, as the masses repeatedly commanded Joakim to “noch ein beer!” That was just one of many antics from throughout the evening, another happening when Thobbe would continually start playing the melody to “Swedish Pagans” and egg the crowd on to start singing it between each song.

Since the band was touring to support their latest album Heroes, six songs from the album found their way into the set, including the aforementioned “To Hell and Back” and “No Bullets Fly,” after which Joakim announced the entire performance was being filmed for a live DVD/Blu-ray, which only served to send the rabid crowd into an even further frenzy, as “Resist and Bite,” “Far from the Fame,” “Panzerkampf” (complete with a tank battle, with two panzers, Audie and Murphy, positioned on either side of the stage), and a special “Noch ein beer” version of “Gott mit uns” each followed. The crowd was so worked up during the set, which ignited an endless stream of crowd surfers overhead. Although we had to turn around every few minutes and make sure no one was about to drop on our heads, no one around me seemed to mind as we all worked together and helped each other out whenever surfers floated by, which was even occurring between songs.

Endless columns of flame accompanied “The Art of War,” which was followed by “Soldier of 3 Armies” before finally getting to “Swedish Pagans.” “Screaming Eagles” closed out the proper set, before the band returned to the sound of air raid sirens for an encore of “Night Witches,” “Primo Victoria” and “Metal Crüe,” which ended with flames, fireworks, and confetti. Sabaton came to conquer Wacken and they were overwhelmingly successful in that campaign.

Perhaps there’s no band that better personifies heavy metal than the Metal Gods themselves, Judas Priest. It’s nice to see that more than 30 years into their illustrious career, the band can still deliver the goods when it comes to the live arena. Priest are responsible for some of the most well-known, frequently played heavy metal anthems of the genre and that’s just what we got, and then some, over the next hour and 45 minutes.

The 15-song set touched on a number of albums from throughout the legendary discography, with the lion’s share (three songs each) focusing on British Steel, Screaming for Vengeance and Redeemer of Souls, which stands up nicely with the rest of the band’s catalog. It was refreshing to hear cuts such as “Dragonaut,” “Halls of Valhalla” and “Redeemer of Souls” along with the classics. “Dragonaut” kicked things off, which was followed closely by “Metal Gods” and “Devil’s Child” (a personal favorite) before the epic “Victim of Changes.” To be clear, Halford can no longer hit those same highs from his heyday (who could this far into their career?), but let’s keep in mind we’re talking about one of the greatest set of pipes in metal and his performance here is still effective.

“Turbo Lover,” “Beyond the Realms of Death” (one of the better ballads out there) and “Jawbreaker” each got their turn before ripping through “Breaking the Law” and “Hell Bent for Leather,” which Halford, of course, performed from a motorcycle, to end the set. The band returned for two encores, first with “The Hellion/Electric Eye” and “You’ve Got Another Thing Comin’,” which the audience sang with full throat. Priest wrapped up the night with the blistering “Painkiller” and one final party anthem in “Living After Midnight” before saying goodbye.

Richie Faulkner has proved time and again he is a more than suitable replacement to fill the shoes of the exceptional K.K. Downing, his youth and energy breathing new life into a band that began in 1969 and still has the passion to write, record and tour. The longtime rhythm section of Ian Holm and Scott Travis is still strong as ever, and while he may not be darting about the stage like Faulkner, Glenn Tipton can still drive home those all-too familiar riffs and dazzle with those unforgettable solos. No disrespect to the Metal Gods, but as good as Judas Priest were, I still think Sabaton stole the night.

The night (and festival) could have, and probably should have, ended there (for me), as I later realized I was too exhausted to go on much further, but there were still bands to be seen and I was determined to take advantage.

My next stop was the nearby Party Stage to check out the Irish folk sounds and tales of the sea of violin-fueled party rockers Santiano, who Simone had played for me and planned to also watch, as they were a favorite of hers. While I didn’t run into Simone at the stage, I only stayed for part of the performance because the mud in front of the Party Stage had still not fully dried, as had been the case for the most part in the infield with the nicer, warmer weather, and I wanted to keep my feet as dry as possible. From what I did see, the audience seemed to relish the band’s incredibly catchy melodies, as they danced, clapped and sang along with the energetic performance, which included plenty of pyro as well.

As I made my way back to dryer ground, and one final trip to the Bull Head City tent in hopes of seeing Swedish extreme metal outfit Shining, I was able to hear a bit of Cradle of Filth, who were destroying the Black Stage. I always look forward to the black metal headline performances at Wacken, but since I have a much better chance of seeing Cradle of Filth stateside, I opted for the much rarer opportunity to see Shining. However, by the time I made it back inside the tent, my legs were dead, my back was ready to give out and I was fighting exhaustion. I found an open spot and took a seat on one of the barricade bars toward the back of the tent and more so listened to the depressive black metal tones of Shining, rather than watched the performance. As such, I unfortunately can’t provide much more of an account of the performance, other than to say those that were gathered in the tent seemed to enjoy the icy riffs and raspy vocals.

Following Shining’s performance, which ended around 2 a.m., I found a spot outside the tent to sit down and give my back a much needed rest. While relaxing in the chill of the early morning temperatures, I could hear Subway to Sally ending the festival with a big folk metal party on the True Stage.

Whenever Subway to Sally are confirmed for the festival (another regular over the years), they almost always have the final slot of the night to close out the festival and I’ve never been able to last through an entire performance. I usually stay for a few songs and then head back to camp to get some rest before cleaning up and taking everything down the next morning in preparation for the long journey home. This year was no different. When I finally got up, I made my way back to camp, crawled in the tent and crashed.

Wacken 2015 marked my fifth journey to the holy metal land and all things considered, it was the best experience yet. The torrential rains during the first half of the week would be my only complaint, but as they say in Wacken, see you in Wacken – rain or shine. To get to experience the reunion of Savatage, see Running Wild and Sabaton execute flawless headline performances, cross Bloodbath off the bucket list, or get the opportunity to see the likes of Angra, Falconer, Thyrfing, Samael and Powerwolf, it was all worth it.