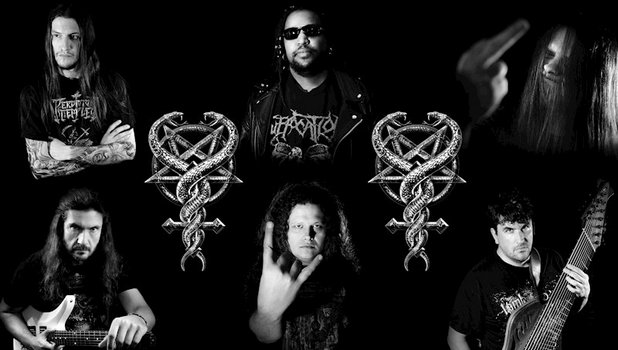 International death metal act Voodoo Gods might not be the first name that comes to mind when you think of the genre, but you are certainly aware of its band members. Vocalist George ‘Corpsegrinder’ Fisher, alongside guitarists Jacek Hiro and Victor Smolski, just as a starting point. With all of said talent involved in the act, you can expect some rather strong forces within the band’s newest release, The Divinity of Blood. Lots of primal energy, catchy songwriting (for the genre), and instrumental heroics across the board. All the while, not worrying about having to blast their way through a track. To get some more info, we fired some questions over to drummer Alex Voodoo to find out about their latest work, the band’s strengths, and what he enjoys about death metal.

Dead Rhetoric: What’s the band been up to since Anticipation for Blood Leveled in Darkness?

Alex Voodoo: Well, it took me more than two years to complete the new songs; most of these songs were written in 2016, I rearranged few parts and and we did like 3 different mixes for this album. There were also few legal issues, we had no record deal for 2 years.

Dead Rhetoric: What are you particularly proud of with The Divinity of Blood?

Voodoo: I think I refined myself as a songwriter and composer and the new material is more diversified. I think it is a little more melodic then our previous material; few parts are also influenced by extreme metal and really fast. We never use blast beats, but I tried to push the double bass and skank beats to a different level. There might be some time signatures which will raise some eyebrows.

The album is pretty straight forward, but the guitar leads are something, people will have to listen few times, before they get them. Some of them are very far from metal and beyond anything you ever heard in death or thrash metal. I am also proud of our current line-up. Especially that Victor Smolski joined the band; his style works perfectly for Voodoo Gods, because many of my compositions are influenced by classical heavy metal and power metal.

Dead Rhetoric: What do you feel that Andy La Rocque contributed in terms of the album’s production?

Voodoo: Andy LaRocque has been our producer and mentor since 2014 and we became really good friends in early 2014. Andy knows exactly how we wanna sound and what is important for our music. He supports our ideas and tries to realize everything we wanna integrate in our music. Andy LaRocque is, for me, a full member of Voodoo Gods and I would never work with anybody else.

Dead Rhetoric: What can you say about the album’s lyrical topics?

Voodoo: My themes are mostly: Voodoo, the spirit world in nature and war against Christianity. Most lyrics surround these topics. I am a convinced opponent of the church; so I still write and compose around these issues. I am not trying to proselytize people; this is just my way, to deal with certain things. This album might be a little more angry and aggressive, lyrical-wise. It bristles with genuine hatred and abhorrence towards the church.

Dead Rhetoric: What can you say about the relationships you have with the other band members?

Voodoo: For me it was always important, that my bandmates are also friends. Most of us know each other since the mid 90’s. We are all really good friends.

Dead Rhetoric: What do you view as the strengths of Voodoo Gods?

Voodoo: For a band like Voodoo Gods it is vital, that we are able to play anything. With this line-up, there are no more limits, no more boundaries to our musical approach; now we are blessed with musicians, who can play pretty much everything. Also, in extreme metal you cannot cheat; people will notice, if you try to do something, which is not in your comfort zone; that is the reason why we use two vocalists.

Dead Rhetoric: Is it frustrating having to shoulder the ‘supergroup’ status as a band?

Voodoo: I don’t think about those things. I always try to give my best on each record!

Dead Rhetoric: Given that many members have other bands that they are involved with, how do you balance time in for Voodoo Gods?

Voodoo: We just do our best, since all of us are friends, it is much easier to organize and adjust to each other’s schedule.

Dead Rhetoric: How do you feel that your drumming has evolved over the years?

Voodoo: I became quite lazy over the last years, but since 2020 I practice again daily. Before recording sessions, I do a drum bootcamp for several weeks.

Dead Rhetoric: What do you enjoy about death metal as a genre?

Voodoo: In my opinion death metal is a philosophy and like heavy metal it is a way of life. The values are the same like back in the days. One thing that changed, extreme metal became more dominant in the death metal sector. I am pretty much stuck in the 90’s. death and thrash metal from the 90’s are the ones I feed on.

Dead Rhetoric: Do you have any upcoming plans, given the state of the world at the moment?

Voodoo: I worked out a new concept for our live shows and we will be soon seven members. We plan to play more shows and have a constant live presence, therefor we recently agreed on a collaboration with a tour agency. We had already few shows scheduled for July 2020. Now we have to wait and see. One thing we will do as soon as this shit is over; we will record our first European live show on DVD, Blu Ray.

Thank you for your time and support; please be safe out there……. 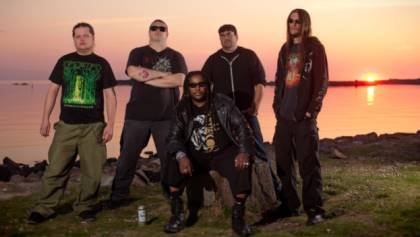