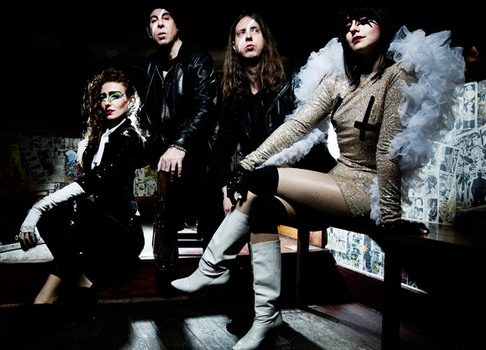 We officially close the book on 2018 with our Visual Rhetoric column. There’s much to be excited about in 2019, as it is with each new year and the promise of plenty of new metal releases to savor and enjoy but let’s take one more trip back to catch some of December’s best videos. This month we look at Beyond the Black, Deadtide, Ghost Ship Octavius, Hinayana, In Flames, Mother Feather (pictured above), Pathogenic, Space Vacation, and Thornbridge.

Beyond the Black
“Breeze”
Heart of the Hurricane
Napalm
The most gentle of the Heart of the Hurricane tracks gets the video treatment, focusing on vocalist Jennifer Haben and an older woman who is dancing throughout a house. It may seem minimal, but it completely works within the context of the dreamy ballad. The dancer has a whimsical quality that does truly convey the emotion of the touching and slightly heartbreaking track. Sometimes you have to wonder how the ideas for certain tracks come to surface, and this one completely nails the elegance of the song and adds something more to it. Stunning work. – Kyle McGinn (Beyond the Black on Facebook)

Deadtide
“Alteration”
Single
Self-Released
Upcoming melodic death metal act Deadtide returns with a new single/video that was recorded by Thomas Tjäder (who also did their video for “Begin the Dream”). Again the band shows a huge step up in both the musical and visual aspects with this video, with a variety of vocals and dynamics as the song progresses – everything from clean to harsh and acoustic to thrashy finds its way into the track, giving it an epic feel even within the 4-minute runtime. Some band footage alongside some shots along the Jersey Shore and Atlantic Ocean are a nice touch, suiting the reflective lyrics of the song. Don’t sleep on this band if you enjoy well-executed modern melodic death metal, it seems they are just about to break through. – Kyle McGinn (Deadtide on Facebook)

Ghost Ship Octavius
“Edge of Time”
Delirium
Mighty Music
Featuring past or live members of Nevermore, God Forbid, Armageddon and Ashes of Ares, Ghost Ship Octavius is a progressive metal band returning for their second album, and here we have their latest video for “Edge of Time”. Given the band’s natural image and coloring scheme proclivities, it’s great to see the blue hues and gothic-like approach to the filming when it comes to overhead and side angles for the band performances. The stock visual footage of clouds, mountains, and water enhances the lyrical content to give the clip that outer galaxy representation. The song itself contains an echoing guitar refrain, some stunning Queensrÿche-like guitar sequences plus beautiful orchestration – the melodies shine as well – twisting together passages of Devin Townsend against gothic and progressive rock pastures. GSO continue to step up their game, and hopefully the world will appreciate and jump on board for this is seriously mind-changing material. – Matt Coe (Ghost Ship Octavius official website)

Hinayana
“The Window”
Order Divine
Black Lion Records
The dark and gloomy doom/death of Hinayana is one of the US scene’s greatest secrets as of late. “The Window” from a audio standpoint provides exactly what fans of this genre look for, with epic riffs that feel both majestic and introspective. The emphasis on the melodic death metal side of things gives the band a edge, with soaring moments that are brought back down and grounded by more solemn ones. The video itself uses a suitable grey tint to it, given the band’s vibe, and the scenery used in the track does a good job of capturing the grandeur and scope the act goes for. Crushing yet sublime. – Kyle McGinn (Hinayana on Facebook)

In Flames
“I Am Above”
I, The Mask
Nuclear Blast
Another video done in more of a minimal sense, In Flames’ latest only shows the face of Martin Wallström (Mr. Robot), who is lip-syncing the lyrics of the track with some occasional visual effects. It’s oddly entracing, and will probably be a little hit or miss because of it but it’s nonetheless an outside the box approach. As for the song, it puts the band more towards the Come Clarity days, with some catchy melodies and heavy riffs alongside a pleasant amount of growls, which should please some older fans (including this scribe). Hopefully this is a better indicator of the upcoming album than “(This is Our) House.” – Kyle McGinn (In Flames on Facebook)

Mother Feather
“Red Hot Metal”
Constellation Baby
Blacklight Media/Metal Blade Records
Certainly one of the flashiest videos of the month, “Red Hot Metal” features wrestlers Maria Manic and Matt “The Bulldozer” Tremont doing battle in the ring, while the band plays away in a red hue. Between all of the action and the band’s stage get-up, there’s no shortage of entertainment as the groovy track simmers in riffs that will keep your attention from a musical perspective as well. It may not be ‘metal,’ but the attitude is definitely there, and the track should definitely entice some metal fans their way without question. – Kyle McGinn (Mother Feather on Facebook)

Pathogenic
“The Lie of Humankind”
Single
Self-Released
Massachusetts extreme metal act Pathogenic returns with their latest single “The Lie of Humankind” – throwing everything from deathcore to progressive riffing, turn on a dime breakdowns and transitions, plus numerous melodic accents for a head turning arrangement just under the six-minute mark. Smartly understanding the need for groove, hooks, and calm restrained acoustic guitar, piano, and bass heroics against the savage brutality, the video also features panoramic scenery, plenty of woods, and a storyline with a man, woman, and zombie/terror imagery led through a garage. It’s been four years since their last EP and sets the stage for another blockbuster release – as this is seriously aggressive and dynamic at the same time. – Matt Coe (Pathogenic on Facebook)

Space Vacation
“The Black Divide”
Lost in the Black Divide
Pure Steel Records
These days options for videos can be as easy or as expansive as you choose, depending on the time and resources available to you. In the case of the latest effort from California heavy metal band Space Vacation, they reached out to animator Ryan Weibust to create an outer space meets video game feel for the song “The Black Divide” – and that’s exactly what comes across here. You imagine the band going through these sequences, sensing the fun and torture all the same searching for the holy grails of guitars, amps, and equipment when they walk out of the Safari Lounge into the space ship. The galloping Maiden-esque riffs and dual vocal harmonies make this a stellar soundtrack to a truly fun video – proof that you can move beyond the ‘band playing a warehouse’ concept. – Matt Coe (Space Vacation on Facebook)

Thornbridge
“Theatrical Masterpiece”
Theatrical Masterpiece
Massacre Records
Let the procession of Orden Ogan meets Blind Guardian/Grave Digger style acts begin – that would make you think of German band Thornbridge in a nutshell based on this title track for the forthcoming second album Theatrical Masterpiece. A steady mid-tempo effort of double bass, twin guitar harmonic accents and the larger than life vocal choirs for the chorus – the instrumental mid-section goes for a bit of the classical vibe to vary things slightly. The narrative scenes are minimal in comparison to the candle-lit band performances, but it appears to be handled in the context of some sort of religious persecution and torture tactics of the past given the spider, cloaked gentleman, and various rope/iron clad devices. Catchy little song though that should attract newcomers to the fold. – Matt Coe (Thornbridge on Facebook) 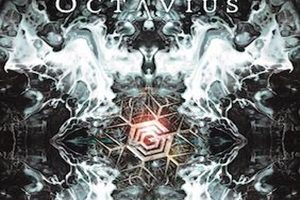