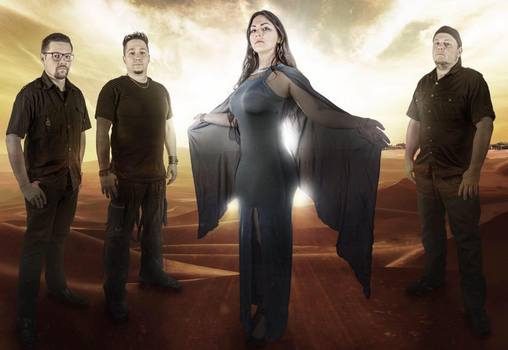 Two years ago, Visionatica released their first album, Force of Luna. It was a solid piece of symphonic metal, but felt a little too familiar in some regards. Now signed with Frontiers Music, they’ve released their second album and have begun to spread their wings further. Including more Balkin and oriental music into their sound has helped to individualize their sound and bring them into more unique territory. It’s an impressive jump, so we got ahold of vocalist Tamara Amedov to give us a more detailed look at their new album and more.

Dead Rhetoric: How did members of the band come together in the beginning?

Tamara Amedov: First Manu and I met via an online musician ad. We immediately found out that we are on the same level and have the same taste, ideas and goals. After that we completed the rest of the band through the same black board.

Dead Rhetoric: How do you feel Enigma Fire compares to your debut?

Amedov: Of course we have learned a lot in the past time. With Enigma Fire we simply dared ourselves to experiment more. We gave the album more power and fire! 😊 Besides, I really wanted to bring in my Balkan origin. As my father comes from Macedonia, I know Balkan and oriental music, and I love it. That’s why I really wanted to include these influences into the new album this time.

Dead Rhetoric: What are some of the lyrical concepts that are in the album?

Amedov: The album is about war and peace, secrets of the past, the origin of life and history. I am currently interested in a lot of things. Genealogy, history, legends and pre-astronautics.

Dead Rhetoric: What do you feel that you have learned as a band in the last three years?

Amedov: You learn a lot because life is a learning process. Personally, I have learned that you really have to follow your heart. With Enigma Fire I have found my identity and would like to make it also part of the upcoming albums. The fans can look forward to something new and yet familiar.

Dead Rhetoric: What can you say about the video for “The Pharaoh”?

Amedov: “The Pharaoh” is about the question if we are all alone in this universe. I like watching documentaries on such topics. Ancient Egypt is also a topic, which interests and fascinates me. I love the pyramids and their secrets. In pre-astronautics, it is said that aliens long ago visited the Earth and that they built the pyramids, so that humanity was once technically more advanced than today. Only to destroy themselves and to be catapulted back to the Middle Ages. Today, one only has to imagine what it would be like if suddenly there was no electricity left.

Another assumption is that we were brought to earth by extraterrestrial beings as a punishment because of possible past evils or wrongdoings of humanity. That may sound ridiculous to many, I cannot believe in many things, as we know absolutely nothing about this infinite universe. So where do we take this arrogance to call ourselves the smartest, the crowning glory of creation and to say that we know everything?! Maybe we think we know a lot, but we don’t. I think the more questions you ask yourself, the more interesting and exciting this topic becomes. I think the music video will create the same ‘mystique’, Area 51 already does for many. 😊 The video shoot was very exciting and action-packed. Above all, we loved working with such fantastic and brilliant people like the director and the actors as it is always a lot of fun.

Dead Rhetoric: How’d you make the jump to Frontiers?

Amedov: Our management gave us a lot of support. We were so surprised and happy to receive an offer from such a great, fantastic label! We are really thankful and look forward to the future with Frontiers Music at our side.

Dead Rhetoric: What sort of training have you done for your vocals?

Amedov: I started singing from an early age and grew up in a musical family. My uncle and father were musicians in Macedonia and when they came to Germany, they first made their money only with music. At the age of 14, I spent four years in the Staatstheater Nürnberg in the Youth Choir and sang in opera performances such as Hänsel and Gretel and The Rosenkavalier. After that, I was part of the theatre for two more years.

Dead Rhetoric: What are some of the things that you like about the symphonic metal genre?

Amedov: I love the unique combination of goosebump-inducing orchestral soundtracks and metal. That stole me away into a completely different, new world, which has given me a lot of confidence and opportunities. This music helped me to grow into the person I am today, I owe it a lot, I think. 😉 I’m happy and really grateful that I was confronted with this kind of music. No other music is as powerful and influential to me as symphonic metal.

Dead Rhetoric: You have written a novel called Enigma Luna – is there a connection to the album with this?

Amedov: No, there is no connection. Except maybe “She Wolf”, when I think about it now. 😊 The novel is about the myth of werewolves.

Dead Rhetoric: What’s different about writing lyrics versus a novel?

Amedov: When writing a novel, of course, you sit much longer and more elaborate on writing. As a result, you are also caught longer and more intense in the history. But both have a lot of heart and soul in it!

Dead Rhetoric: What plans do you have for the rest of 2019?

Amedov: Nothing is planned yet. Of course we hope to be able to play at bigger festivals soon and also to go on a European tour and maybe also in the USA. We are always looking forward to the future. 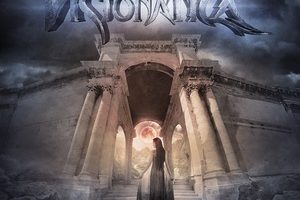