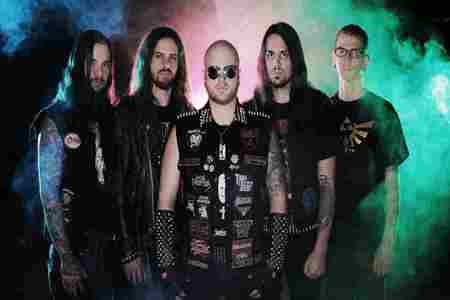 Rogers: Seriously! And getting an email from the singer of Primordial asking us if we wanted to be on Metal Blade – we thought it was like a joke at first. I love Primordial; The Gathering Wilderness was one of my favorite albums that came out when I was a kiddo in high school. So that was really cool.

Dead Rhetoric: That’s definitely one of the cooler signing stories I’ve heard in a while.

Rogers: It was interesting. It was really done the old fashion way. We didn’t go overboard with social networking. We aren’t into that, we don’t like doing that. All we had was a Facebook and a Bandcamp, and it got us signed. All that we did was make music.

Dead Rhetoric: It seems so rare nowadays, the impression I get from most newer bands is that constant touring is one of the only ways to get noticed by a label.

Rogers: I think part of the reason that it worked a little differently for us is because of our location. [Salt Lake City] Utah isn’t really a place where people think of as a music city. Maybe for bands that are playing in a city where there are tons of bands [you need to tour]. Like those coastal music cities and those Midwest cities that you expect a lot of bands to come from. There are so many awesome bands that are trying to be heard, but we are just in kind of the middle of nowhere. It just went through completely different channels.

Dead Rhetoric: Looking at the lyrics of “Dungeon Master,” which has been available online for a while, is anyone in the band a big Dungeons & Dragons player?

Rogers: What tipped you off? [Laughs] Definitely, particularly Lee and I, are avid tabletop gamers. I hate writing lyrics actually, it’s my least favorite part of doing music. So anything I can draw inspiration from, I’m just grateful that it inspires me enough to get a completed song. So I tend to turn to the stuff that I’m really passionate about, whether or not people think it’s cool – I don’t care. Non-music stuff that I’m really passionate about is fantasy lyrics or fantasy gaming (video games or tabletop games); these are the things I grew up on so I wanted to bring those things to Visigoth. So that song is, lyrically, my little tribute to how big of a part that tabletop gaming played for me and maybe some of my friends growing up. There’s actually references to games that are not D&D in there; there’s a couple of different tabletop references in the lyrics for people that are really into it, they’ll pick up on it.

This really isn’t anything different for us. The title track for the Final Spell EP was based upon the back story behind the original Magic: The Gathering sets. Back when it was Dominaria – the war between Mishra and Urza, the Brother’s War – that’s what the lyrics to that song are based on. I’ve played Magic: The Gathering since I was seven years old.

Dead Rhetoric: Going along with that, you guys write pretty lengthy material. Does it take you a while sometimes, if you are not a big lyric writer, to pull something out that will go 8-9 minutes long?

Rogers: Yeah, writing lyrics to songs that are long is kind of a pain sometimes. But honestly, almost every band I’ve ever been in deals with very long songs, so I’m so used to it that it’s not really very different for me. With the lyrical content that I tend to gravitate towards, longer songs due suit them better anyways. I like songs that tell stories, as opposed to songs that are based on my emotions or personal experiences. I don’t really care about any of that; I like fantasy story-telling, that is my favorite type of heavy metal lyric. So longer songs allows the story to be fleshed out a little bit better. I’m not saying they are great, as I know I’m not the greatest lyricist out there, but it at least gives me a little more room to flesh out the story.

Dead Rhetoric: Have you taken any vocal lessons or did it just come naturally?

Rogers: I have never taken a vocal lesson, and in fact, I probably should start doing that. Just to make sure I am keeping my voice in shape. I recently had acute acid reflux, and it’s new for me and it’s really hard on my throat. It’s something recent that I have been struggling to deal with before we hit the touring season and I think lessons would probably help. A lot of the technique that I use while singing I carried over from the flute. I’ve been playing the flute since 4th grade. A lot of the muscular techniques in your diaphragm and head are very similar so that’s what I applied.

Dead Rhetoric: Who would you take your greatest singing inspirations from?

Rogers: Oh god I hate this question. There’s so many answers. I am a die-hard metal fanatic. I love heavy metal and all of the genres that are kind of “real” metal genres, be it extreme or traditional styles. The way I’ll narrow this down is the bands/singers that I’ve spent a lot of time singing to in the car while commuting to work or school. Which is how I figured singing stuff out for Visigoth when we started, because I’d never been a singer before that. This was 2010, so just 4-5 years ago. I kind of conditioned myself to singing by singing in the car. I did a lot of singing a lot to, of course, Judas Priest. Rob Halford is huge for me. I should mention that I’m not saying that I sound like any of these guys or even remotely on the level of any of these legendary guys. I listened to a lot of Dio and Rainbow as well. Tony Moore, the singer on Thundersteel and Privilege of Power by Riot. That was huge for me. I really look up to his performance on Thundersteel.

From the newer stuff, JB Christoffersson of Grand Magus. I listened to a lot of Grand Magus because my vocal range is right in that same range as the Grand Magus stuff. Tony Taylor (RIP) of Twisted Towers Dire. Particularly the album Crest of the Martyrs. I use a similar vocal layering styling that I kind of pulled from that album. I love the way that Tony’s vocals were layered on that and The Isle of Hydra. I pulled a lot of that specifically for Visigoth. And Brian Balich of Argus. Out of the currently active bands, that’s one of the best vocalists going in heavy metal, that guy blows my mind. I’m trying to get a little bit of that grit in my vocals, but I can’t do it like he does. There’s a million and one singers that I could go on about, but I gotta stop.

Dead Rhetoric: What can we expect to hear from you guys throughout the year here?

Rogers: It’s going to be a lot of touring and playing live gigs. We do have about half of our next album written. We are pretty hungry to write some new material. On The Revenant King, the songs on the album range anywhere from ‘finished the song one week before we hit the studio’ to ‘wrote it 4 years ago when we first formed the band.’ The material is kind of all over the place but we are really happy to have it out so we can have our initial statement and start touring. Then we are hungry to get some new material put out. So a lot of playing live and hit up album two when we have the chance.