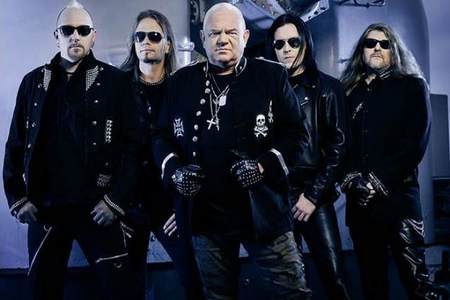 Dead Rhetoric: Your son Sven will be filling in for drummer Nigel Glocker on some of the rescheduled Saxon tour dates in Europe next month – how does it feel to have family members following in your metal footsteps?

Udo: For me it’s something else. He was the drum roadie for Steelhammer on the U.D.O. tour, he’s the drum roadie for Saxon on their European tour. And then Nigel had his brain issues, they had to cancel 5 shows and then I heard that Nigel and Biff said that my son could play for those 5 make up shows. I know he’s a very good drummer, but are you sure? They said yes, when he was drumming in sound check he was doing some Saxon songs. I’m very proud of this young boy!

Dead Rhetoric: At this point in your career, what do you think makes for a good show? Especially considering you’ve done everything from touring small clubs to headlining prestigious festivals with 70,000+ fans…

Udo: Believe it or not I like more shows in clubs, say with attendance of 800 to 1,500 people you have the people directly up front. Of course big festivals – I did a festival in Russia once for 250,000 people – this is a different atmosphere of course, and the fans are really far away. You have to do a different type of acting on stage, in modern days you have screens everywhere so the fans can see you. I prefer more the smaller shows in clubs- also when you go to bigger halls like 3,000 – 4,000 people in Russia, it’s like already the people are far away. I like being in your face, that’s rock ‘n’ roll – it’s what I did recently with the Metal Singers tour in South America. We did shows between 800 – 1,500 people, and it was like ‘yeah!’ – very rock ‘n’ roll, very cool. The sweating, it’s just much more fun.

Dead Rhetoric: Have we set about working on the definitive life story of Udo in book form – as I remember our last conversation you talking about getting to work on it during bus rides from show to show… are there any particular books from musicians you’ve read through the years?

Udo: I’m still working on it. With Steelhammer and the subsequent touring I was really busy, and now working on the mixing for this DVD of the classical record – the new album, and the touring which will be the longest U.D.O. has ever done. There is so much stuff, it takes a while. Maybe one or two more years, I will take it step by step. This will be a little bit different, it’s not going to be a straight biography. I think there have to be a little bit more stories, you can laugh and you can cry (laughs). And shocked (laughs).

Dead Rhetoric: Through the years, what’s the most difficult set of circumstances or weather conditions you ever had to deal with while on tour/ stage?

Udo: Oh, this just happened in South America… what is the degrees in Fahrenheit, I am German so I think in Celsius terms. It was in Brazil, we had over 45 degrees C, maybe 100 degrees F, maybe one of the hottest concerts I’ve ever had to deal with on stage. Everybody was like, ‘wow’! I’m still alive, and now I am in cold New York City. This is quite normal for me like in Germany.

Dead Rhetoric: Over the recent years, have there been any particular bands that impress you that you think have the potential to carry the metal torch over the next 10 or 15 years?

Udo: This is… there is one band in Germany I really like. For me they do nothing wrong and keep going, that is Kissin’ Dynamite. I am like a father to them, I’m a mentor to them, I would give them advice and they were really doing it. In a way they are getting successful and could be maybe an international success, as long as they do nothing wrong (laughs).

Dead Rhetoric: How do you feel about a band like Sabaton adopting some of your military stage gear in their live performances – as you started that type of look on stage?

Udo: I have known those guys for a lot of years, I have performed as a guest singer at their own festival in Sweden. It was a bit shocking, but I think they are good looking. They were inspired by us – but I remember when I started wearing the camouflage stuff, (the fans) originally thought because we were Germans that the Nazi stuff was coming back which wasn’t true. That happened to Accept in the early years – but now it’s like a fashion, there’s nothing special about it.

Dead Rhetoric: What does 2015 look for U.D.O. in terms of touring? Any plans to hit new countries if possible?

Udo: We start touring in support of this record in March through the middle of May in Europe- the festival season then starts as well as the big show at Wacken – from September through December we do South America, the second part of Europe including Russia and a lot of the Eastern countries. We will go to Japan as well, and we are looking on a US and Canadian tour as well. Between September and December we are definitely coming back to America. China… it’s a difficult thing, I hope to make it to Australia. I know there are two places as well in India Hammerfall told me about that as they’ve done two festivals there. I’ve never been to South Korea, but maybe on the way from Japan we can also fit that in. I would love to do something like this.