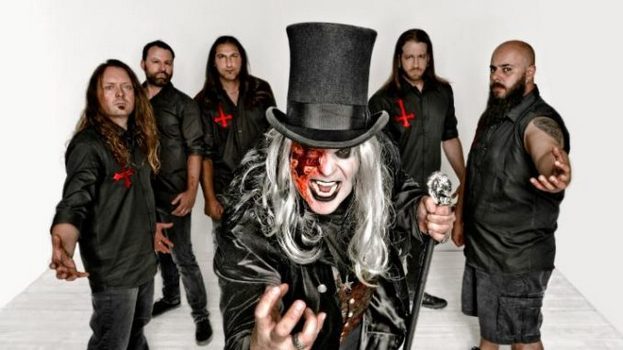 Dead Rhetoric: Describe the outlook of Them live – what do you hope the concert goers are able to get, see, and feel each time they come to take in a live show of yours?

Fossor: The main goal is to when a concert goer leaves our concert, that they say, ‘holy shit- that was some kind of show!’. Overall, you know. First things first, the music is number one. The music has to be awesome, and they have to really enjoy the music. They have to know musically they were given a great show. Then you add all these theatrical elements that are interlaced throughout the performance, they will be at a loss for words at the end of the show. We all want them to walk away saying that was experience, and that they can’t wait for the next one.

Dead Rhetoric: How are you able to work well as an international outfit – is the band realistic as far as the vision, outlook, and goals for what you hope to be able to achieve with Them?

Fossor: We work through the internet. We send files back and forth to each, and converse through instant messaging. A lot of people feel that if you are a band, you have to be in the same town or same geography location. That is not true. We weren’t even a band and got together two days before our first tour – and when we played our first show, people couldn’t believe how we performed. Now in 2018, we’ve played a number of runs together as a group – we have a formula for that as well. We will have a warm up show in Germany, and get together several days before to rehearse. Then we will play. There are heartfelt moments when we get together because we are like family now. But we are a business – German efficiency. After the first initial run of rehearsing two to three days before, maybe a week. Then every run after that we will rehearse maybe one day. Where does that leave us individually? When we are home, we are big boys – we have to do our own homework and rehearse on our own.

Dead Rhetoric: I’d like to explore a quote from a previous interview of yours I read on Capital Chaos TV in 2017. You said that you have been told by miserable people forced into your life that you should grow up and stop chasing your dream. Who were these people, and does it fuel your desire to continue achieving even more of your dreams and shove it in their faces?

Fossor: (laughs). That was only one person, that was my first ex-wife. Back in 2015 she said that to me. That I was going to go on tour- she said, ‘rock on, Troy- rock on’. That I wasn’t going to make anything of myself with this, and that I was wasting my time. And you know what? That hurts. I’m not trying to become a rock star. All I’m looking to do is to create something that I believe in. That’s it. And does it actually fuel me? Not really – it did at one point many, many years. What started this all over again was her leaving me for another friend, and taking my kids. That hurt me, and put me in the dumps emotionally. I was grasping for anything to bring me back up. So I got back into music. For many years when I was married to her, and we had our family, I stopped singing with Coldsteel. I focused on family and a career. I tell you, music is what saved me emotionally. It brought me out of the dumps when she left me. At first it was jamming with friends in a basement doing covers. I joined a cover band and playing all different metal songs. We’d throw some originals in- this was in 2003. I like playing originals- I enjoyed writing music again.

I played in a Megadeth tribute band, and I wound up doing a King Diamond tribute. I wanted that original aspect of what I could create. Some people mock it, some people knock it, some people love it. Most importantly, I enjoy it. By her making that comment, just trying to knock me down, that’s a miserable person. You get a lot of that online where people look for things- she’s one of those people. She was looking to bring out negativity in something, when something good is being done. She was not successful. I’m not trying to fulfill a dream- I’m living my dream. Tomorrow we may not be here. I am almost fifty years old, I may not be here tomorrow.

Dead Rhetoric: Your day career consists of IT work in the healthcare field. Have you found any fellow co-workers interested in your metal endeavors and supportive of your alter ego music career?

Fossor: Yes. I work for a medical facility, some of the top neurologists in the Suffolk County, Long Island area. Some of the doctors that I work for, they love the music. They are very supportive. The administrative team where I work, they are supportive- they understand when I have to go out for tour, I have adequate coverage. There are almost 300 people here, and they follow the group. Some of the guys that work in the IT department with me, they are fans of the music. It’s very interesting, overall everyone is very supportive.

One of the characters that was in the live show, her name is Angela – she played the role of Henrietta Hawthrone, from Sweet Hollow, and she toured with us. A 75-year old woman touring with us. She won’t be for a while, because her character didn’t live in Sweet Hollow, she dies towards the end. The point is- I work with her. I went up to her, out of nowhere years ago, and she would do King Diamond tribute shows with us, as she played Grandma. We would wheel her out in the antique wheelchair when we did songs from the Them album. I remember asking her if she wanted to be in the show I was doing – and here I work in a shirt and tie. She said sure- I trust you. She’s family now. She would jump on a plane and go anywhere with us. From where it’s started to where it’s going, she’s met a lot of people that she otherwise would not have met if not for this experience. She’s made a lot of friends – close friends in Germany now. All these people brought together by this – some people become friends for life. With minimal involvement – it’s brightened her life.

Dead Rhetoric: How do you see the next year shaping up for Them as far as touring and promotional activities?

Fossor: There’s a hard push on promoting the record. The label wanted us to do some shows right away – we did a lot of runs last year in Europe. We wrote and recorded the record – it took a lot of my time. I was there for drums, bass, vocals, and I flew to Colorado and sat there while it was mixed. The label wanted us to play five-six shows around the release. Once we start playing though, we are going to be playing for two years. Not consecutively, but one to two week runs here and there. I wanted to take a breather, switch gears. I have two boys in college, my daughter is almost 17 and I needed to take care of things for her. I had a lot of obligations going on. This will give me time to prepare for these runs and a video. We will start performing probably in May, through Portugal, Spain, Greece, Bulgaria, Austria, Germany of course. And do some dates in the US and Canada, we are just starting talks now.

The initial focus is Europe. Back in 2016, we did dates in the US and Canada with Helloween – it was six or seven dates. It was a gruesome travel, but we have a buzz going. The US will be broken up into two or three runs, so we can play more places than we played the last time. We haven’t played in South America yet, so we will see. It allows us to begin work on a third record, if they’ll have it- and I think they will. 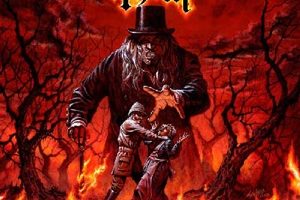