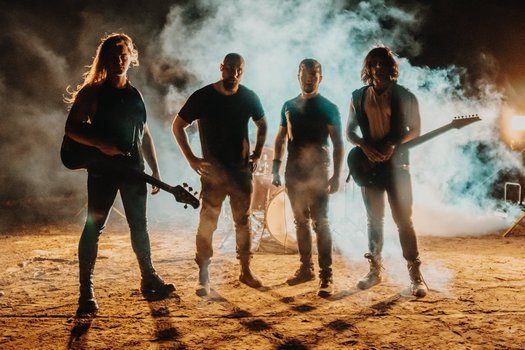 Dead Rhetoric: Festival season is in full swing for Europe when it comes to rock/metal – and many people point out the differences in terms of turnouts, lineups, and general feelings on how Europe seems to do things right or better than the United States. What would you like to see different that could maybe improve things domestically for us to possibly sustain a larger festival model like Hellfest, Sweden Rock, or Wacken down the line?

Alex: I think the one great thing that we don’t ever look at inside the metal community is its growth. I think in the US it has to do with our age limits for festivals – 21 plus festivals makes it so that no younger kids want to go see artists and live music. Other than lowering the age limits to maybe 16 and bringing in the best metal bands.

Nishad: I feel like that there are a lot of factors as to why this happens. It has to do with culture – in Europe, it feels like they still have the same situation over there. In the states, there hasn’t been a sustainable model that has really stuck yet. I know that Mayhem fest was big for a while, Uproar was a moving one for a while. In the states, there’s an issue with families getting into metal. There aren’t a lot of fans in their twenties and thirties that are catching onto it as much as say when Slipknot was a big band that 12-13 years olds were catching onto and wanting to be a part of the movement for a longer time. If you have this age crossing, (it works), that doesn’t really happen anymore these days.

Dead Rhetoric: What do you see as the biggest challenges or obstacles facing The Offering moving forward up the ladder to success?

Nishad: For us, we just want to get out there and play. I don’t know how much demand we have, but for us we want to showcase our music live. We have a great record on our hands, we want to be road warriors until our next album. I think if people saw us live, they would really be into what we do. I saw an interview recently with Alexi from Children of Bodom where his end statement was talking about these days you have to tour, and I believe that’s very true. A lot of people really dread the road, and we haven’t really been christened yet, but I think we are a band that wants to be touring. We want to play shows every single day if we can. We are 26, this is what we want to do.

Dead Rhetoric: What is the best or most worthwhile investment you’ve made? Could be an investment of money, time, energy, or other resource? How did you decide to make the investment?

Nishad: Here’s a curveball for you. Social skills and hanging out with people. Honestly, the older I get the more I realize it’s less about what you know and more about who you know. It’s not even ‘I know this person so I’ll be successful’. It’s more ‘I know this person and I really appreciate this person for what they do’. Having that mentality influenced me, because it’s not about what I can get out of you, it’s more about how can we collaborate together to make something happen. Whether it’s social hangouts or projects, on top of the music we’ve been really lucky to meet up with some great minds and they’ve helped us out a ton. You can get so much more out of life by being around the right people.

Alex: That was a great answer, Nish. I’m not really sure about that question. We sacrifice a lot, and we are still on this ride. The record label thing is really new to us, working with management is very new to us. This festival tour will be the first time we go over to Europe. We make sure that we watch every single band, we try to stick our nose everywhere we can go, and we’ve made every mistake that you can possibly make too. We’ve made every significantly bad mistake as well as making some of the right decisions. There is no formula that works – you try to write the best songs that you can, the best shows you can, be the nicest that you can be, and hope that somebody is willing to help you out.

Dead Rhetoric: When you talk about mistakes, what do you think are a couple of the more significant mistakes you made that turned out to be a blessing in disguise for better things in the future?

Alex: We almost did a buy on show with some power metal band that eventually turned into a relationship with Jen from the band The Genitorturers. Who then took us under their wing and brought us on our first couple of tours. That was probably the best one.

Nishad: That was ironic. We’ve only done two buy-on’s in our entire lives, after the first one we were like we aren’t doing this ever again. Then this one, we tried it – we were so done doing this, and that one ended up being this weird chain of events that led us to that ending. It was funny, we hated the idea of buy-on’s.

Alex: Of course, there’s something about having to sell tickets and clearly not being a scene for that area. We might have only played in front of ten people, but we turned out to make some pretty good friends. (laughs)

Nishad: There’s so many traps in this path and we’ve fallen for a lot of them. We are lucky that we have gotten this far with how many mistakes that we’ve made.

Dead Rhetoric: What’s next for the group over the next year or so to support the record? Have you already started the songwriting process on the follow-up to keep momentum flowing as best as possible, as I’d imagine you’ll be quite active on the road front for some time?

Alex: We have started talking about things that we want to do slightly different on the next record. The idea of going into the studio right now, I’m still having a little PTSD thinking about it- the self-criticism over and over again. At least the next year and a half we are going to tour like nobody’s business, if we are lucky enough. If someone asks us to go, we are going.

Nishad: We aren’t supposed to submit another record until at least 2021, and that will come up very soon. We are a band that takes a long time to write – I may start writing early next year.