The Mist – Screaming to Deaf Ears 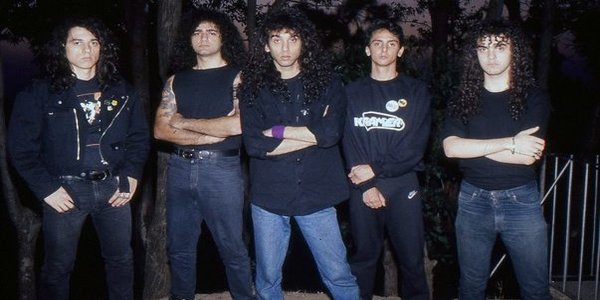 Released at the height of the thrash movement in 1989, The Mist’s Phantasmagoria debut was a grit-filled offering, emblematic of the Brazilian scene in which the band came from. Unlike some of their peers, The Mist eschewed typical metal lyric subject matter for a glance inside outer space and the human psyche, provided by vocalist Vladimir Korg. It suited music that while hardly technical, had plenty of persuasion and underground feel. Phantasmagoria and The Mist as a whole never quite took off, beset by lineup issues and the difficulties that came with being a Brazilian metal band, but the folks at Greyhaze Records have reissued the album, reintroducing it to the metal world nearly three decades after its release. With this in mind, we caught up with Mr. Korg for an email interrogation. Here’s the scoop…

Dead Rhetoric: The Brazilian metal scene tends to be overshadowed by Sepultura, but, there were some pretty good bands happening in the ’80s. Can you describe what the competition was like between all of the bands?

Vladimir Korg: I don’t believe that. Sepultura, quite contrarily, shed light on the bands and scenes from Brazil. Those who were true musicians and believed in what they were doing are here up to this day. Here in Belo Horizonte, the competition level was low. Some bands, with weak arguments, would try to pick a fight here and there. But in every place, it is normal for a certain level of badmouthing to exist, alongside some people of low talent to waste their time in this type of bad vibration. We still have some good Brazilian bands and some bands that are the real deal, such as Krisiun and others such as Nervosa, Eminence and Nervochaos. These bands have a configuration of true bands that know what they want.

Dead Rhetoric: What were your record label options back then? Was it just Cogumelo? Or, was there anyone else?

Korg: There were some labels, which are actually quite good. But Cogumelo is the closest and most accessible. To keep a label alive in this day and age is very complicated.

Dead Rhetoric: When you got signed, what was your reaction?

Korg: I had always been involved in the business, for that reason it wasn’t really a surprise to me. I am friends with the folks at Cogumelo and they have always believed in my work. Nevertheless, when an album arrived on vinyl it was always a reason for a big celebration. It’s really good to see that these things are still relevant for the metal scene and that we are well received outside of Brazil.

Dead Rhetoric: For you personally, was it difficult to split time between Chakal and The Mist?

Korg: No, I didn’t do both bands at the same time. When I founded The Mist, alongside the guys in Mayhem, I wasn’t in Chakal anymore. It is tough to build something different without taking along influences from our previous bands. But I believe we were able to make it happen with The Mist.

Dead Rhetoric: When recording Phantasmagoria, was the band the only thing you did? Or, did you and the guys hold down day jobs on the side?

Dead Rhetoric: What were the recording sessions at J.G. Studios like?

Korg: It has been a very long time, but I remember it being rushed, as it always turns out to be. There was very little time to put each element in its place. But in the end we were able to make it happen!

Dead Rhetoric: Unlike some of your peers, the lyrical content in The Mist went beyond typical topics of death and war. Was it important for you to put a different spin on the lyrics?

Korg: Yes, very much so. After all, I’m the one who will be at the front, screaming all that shit. A lot of bands think that the sound is important. The instrumental part has to kick ass and the lyrics have to fit into it all. With The Mist I wanted to work with poetry. Reading is essential to anyone who writes. The lyrics give the music its personality. It is you saying what you think, even if it might sound naive. You are exposing your soul there.

Dead Rhetoric: Obviously, everyone had big expectations for the album, but things never panned out. Why didn’t Phantasmagoria take off?

Korg: I think we didn’t have the balls to go all the way. Here in Belo Horizonte, or if I dare say, in Brazil, there was a time when records were simply released and nothing else happened. Records were released and one would just hope for the best. Something like what happened with Sepultura. But people forget that Sepultura worked insanely hard for everything to work out for them. A lot of people tried to ride the wave that Sepultura generated. I guess they’re still trying to this day.

Dead Rhetoric: You did The Hangman Tree album, but left the band shortly thereafter. Why did you leave?

Korg: I didn’t feel like I belonged to the band anymore. I had other interests and I felt, frankly, that I was screaming to deaf ears. I lost the fuel to move forward. I don’t really feel comfortable in being just another band member or just any other band. The 90s weren’t easy for Metal. Sometimes it is best to step back and see who people really are and try to comprehend where they are heading. At times like these I always try to find my own way.

Dead Rhetoric: With so much interest in classic thrash, are you pleased to see Phantasmagoria get the release it deserves?

Korg: I’m very happy with what is happening and I hope it continues and that more people are able to listen to and learn about the bands from Brazil.

Dead Rhetoric: Finally, what are you up to these days? Anything new in the works?

Korg: I am in a project called The Unabomber Files with Paulo Xisto from Sepultura and Andre Marcio and Alan Wallace from Eminence. We recorded and EP which can be found on Spotify and Soundcloud. Now we are in the studio recording our second EP, which is called The Enemy of My Enemy is My Best Friend. Life goes on.