Whew. The Metalhead Box survives the impact of plague on the world! The normal ship out time for a given box is around the 25th of each month and as everyone that hasn’t been living in space is likely aware, with the 25th of March the world had effectively entered a state of productive slumber. But the folks over at the Metalhead Box were very communicative and assured that while likely delayed, boxes would go out. I’m happy to report the first plague era box does not disappoint.

As usual, my genre theme is black metal with a vinyl focus. March really leaned into a classic black metal flavor: 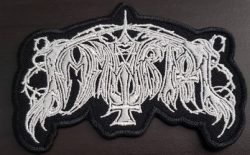 Right out of the gate (well, out of the box) is Immortal’s original logo in patch form. This patch is another solid entry in what has shown to be a consistent strong point in the experience. While I remain sans battle vest, it may be worth considering sewing it into my couch.

Where novelty meets history – a Venom slipmat. There isn’t much to say here but this is awesome! 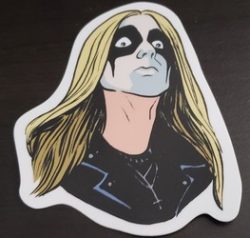 In lieu of the usual band-flavored pins, this month features a sticker with the famous/infamous Dead. Behold and despair! 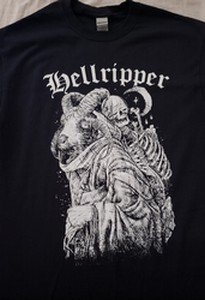 Another month, another fantastic shirt experience, this time from the Scottish blackened/speed project Hellripper. I’ve been crushing speed-influenced projects pretty hard this Spring (Bütcher foremost among them) so this is a welcome addition to my running and listening repertoire. 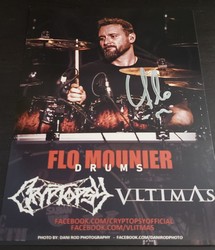 This month the autograph comes via no other than Flo Mounier. Notable for yours truly, the face Flo is making in this image isn’t far removed from the face a Half-Priced Books employee made when I bought a used copy of None So Vile along with Sunny Day Real Estate’s Diary and Alanis Morissette’s Jagged Little Pill. Mood music. 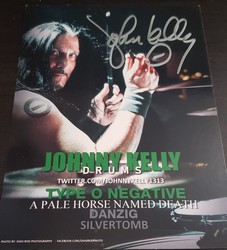 An additional autograph for this month – Johnny Kelly! Noting my lament after the February box, the good folks at The Metalhead Box were more than happy to include one of these. World Coming Down has been on heavy rotation during this ‘tele-life’ phase and this couldn’t come at a better time.

The centerpiece and a spectacular delivery: Ancient’s Trolltaar, an EP originally released in 1995, presented here in remastered and expanded form circa 2017. It is always a delight to encounter something new, particularly from older eras of the genre. Metalhead Box really nails it with vinyl choices, month in and month out.

A fantastic month all around. Given the consistently outstanding delivery under the black metal theme, I’m considering opening up my personal choice to ‘general’ for a more ‘inclusive’ metal experience. I expect the consistency will remain!

A notable inclusion in the package for many this month was the Finnish comedy Heavy Trip.

Do yourself a thousand favors and WATCH IT.