The seasonal turn is underway as I write this, though this September in the DC area has been egregiously humid. I’m often very much a fan of humid weather but this unusual month has pushed my tolerances and has made for some of the most unpleasant running experiences I think I’ve ever had. The Metalhead Box delivered a solid range of items this month, an ample mix of things expected and things surprising. 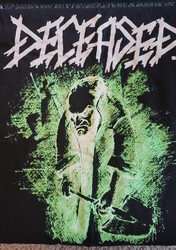 Deceased… Tshirt
For many it is never out of season to be immersed in the spirit of Halloween. While running around the general Arlington area, it turns out I’ll also be supporting a local band while sporting this. Metal works endlessly to both enlarge and shrink the world! 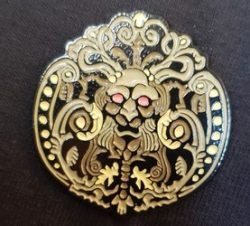 Deicide – Self-titled Pin
This pin is a stunning piece of work, though to look upon my every failure to photograph it you would not know it. The distinctive iconography of the Deicide debut is captured in fantastic form in this pin, however, and is among my favorite pins received thus far. The evil doorknocker lives on! 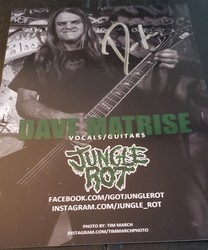 Dave Matrise Autograph
Jungle Rot isn’t a band I spend a lot of time with, though my familiarity with them goes back to high school. Struck at the time by the band’s home location of Wisconsin, a friend and I came to know Dead and Buried as “farmer metal”, not for anything in the music itself, but instead as a response to outside stimuli. “Psychotic Cremation” was to us clearly written in response to a group of dudes walking outside and finding their harvest utterly destroyed.

Clearly our teenage understanding of Wisconsin – and of Jungle Rot – was extremely limited. Nevertheless, this is an awesome autograph addition for yours truly due to that long-running connection. 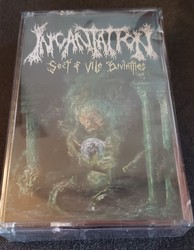 Incantation – Sect of Vile Divinities Tape
This was an unexpected surprise within this month’s offerings. Metalhead Box wrangles exclusives in a variety of forms from month to month and this month it took the form in an exclusive tape release (red) for subscribers. I think this is a fantastic offering of exclusivity of a solid album.

Atramentus – Stygian LP
Given 20 Buck Spin’s regular partnering with Metalhead Box and its slate of releases across August, I wasn’t surprised when I opened mine to find this anchoring the experience. I held out a degree of hope that it would be the contemporaneously released Holocene Extinction (and for some subscribers, it was!), either of which is a fantastic offering. Stygian is one of my favorite releases this year and one I’m happy to own multiple copies of, especially in this clean, no-frills black pressing.

The seasonal turn continues and with it, the dark lengthens.