The Kennedy Veil – Veiled in Darkness 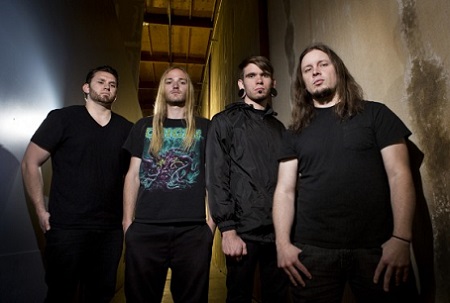 It’s only January, but The Kennedy Veil’s Trinity of Falsehood already seems destined to fill one of my top spots of 2014.  The band’s brand of brutal, technical death metal cuts straight to the visceral point.  Seemlessly blending elements of the forefathers of the past (Suffocation, Morbid Angel) with more modern influences (Origin, Decapitated, Hour of Penance) with a strong emphasis on memorable riffage, The Kennedy Veil seem primed to explode within the death metal community.

Just a glimpse of the jaw-dropping artwork should be enough to ensnare the attention of most metalheads unaware of the band.  Vivid and colorful, it’s a real piece of eye-candy in comparison to the usual black and gray infused covers that will undoubtedly surround it.  So with a few days left until the release of Trinity of Falsehood, I was able to contact drummer Gabe Seeber to get some insight on this promising young band.  Read on for a discussion of the band’s artwork, influences, signing to Unique Leader, and even a brief history lesson…

Dead Rhetoric: Can you give us a brief description on how the band formed?

Gabe Seeber: The Kennedy Veil was initially the idea of guitarist KC Childers (ex-Forktung) and ex-frontman Cody Walker(ex-Skribble). They approached me in 2009 about forming the band when our bands had all disbanded around the same time. (I was in Wretched Dawn then). We got together as a “trial” rehearsal and ended up writing some of the songs heard on The Sentence of Their Conqueror in just a few hours, so I guess you could say things just kind of clicked. Later, we brought bassist Shawn Peterson to the fold and were complete.

Dead Rhetoric: What are some of the band’s biggest influences?

Seeber: We all kind of have our own styles and bands that we listen to, but as far as main influences I guess you could say Origin, Hate Eternal, Hour of Penance and Psycroptic pretty much wrap everything up.

Dead Rhetoric: Is there any meaning behind the name, The Kennedy Veil?

Seeber: The name came from KC and is loosely based on the “Kennedy Family Curse.” It was said that there is nothing darker than a Kennedy’s Veil.

“Jack Kennedy nearly died of scarlet fever at the age of two; he lost his brother Joe junior in World War II; he almost lost his own life as a lieutenant when his boat, PT-109, was rammed by a Japanese destroyer (his heroics on behalf of his surviving crew were immortalized by the journalist John Hersey and still make enthralling reading, no matter how cynical you think you are); his sister Kathleen died in a plane crash in 1948; he was given last rites on three separate occasions; he had Addison’s disease, which he assumed would end his life early; he and Jacqueline had a daughter who was stillborn and a son, Patrick, who died after a few days from what’s now called infant respiratory-distress syndrome; he not only brooded about being in the crosshairs, about how easy it would be for any nut with a gun to penetrate security, but acted out his murder in a macabre skit in September of 1963.” Read more here.

Dead Rhetoric: Your tagline states, “No throwbacks, no breakdowns, no wanking, no trends.” What do you feel is the mission statement of The Kennedy Veil?

Seeber: I guess you could say our mission is just to bring forth straight-forward, honest and brutal death metal. We pride ourselves on a high-energy live performance and not trying to be too over-the-top with sweeps, solos and noodling. We like to stick to the roots, but put our own modern spin on what we think death metal should be.

Dead Rhetoric: How did the deal come about with Unique Leader Records?

Seeber: We self-released The Sentence of Their Conqueror in 2011 and sent it out to Unique Leader. Erik contacted us and was interested in what we had going, but wanted to hear the direction TKV was moving in. So we went to NB Recording in Santa Rosa for the first time to record a single track with producer Nick Botelho and put out “Disciples of Dead Aeons.” That song is essentially what led to our inking the deal with them.

Dead Rhetoric: Trinity of Falsehood improves on the formula from your debut, The Sentence of Their Conqueror. Is there anything you tried to do differently for your second album?

Seeber: We try to think of Sentence as more of an EP than an album. It came together really fast, so with Trinity of Falsehood we really tried to take our time with it and really focus on song-writing and being a much more cohesive band when it comes to our arrangements. Sentence was really just a lot of riffs back to back with blastbeats thrown on top of everything. I feel that Trinity is a huge step up from that and we’re all proud of the work we put into it, and I think it really shows listening to the album.

Dead Rhetoric: You’ve released three songs to the public from Trinity at this point, what’s the initial response been like?

Seeber: The response has been amazing! Everyone really seems to love the new material and we couldn’t be happier! We’ve gotten a lot of great reviews, feedback and more and more people contacting us and picking up merch and preorders. Thanks to everyone who did; we love to hear feedback (good or bad) from the fans.

Dead Rhetoric: One thing that seems to separate you guys from the rest of the brutal death squadrons is your subtle uses of melody. How do you weave together heavy riffs and keep things memorable for repeat listens?

Seeber: Our writing process is largely handled by myself and KC. We’ll listen to some music to get some inspiration and just start jamming on something. When we find a riff we like, we’ll expand on it and try and figure out where to go with it. We try and lay out a basic skeleton for a song, then when the whole band is together we’ll hash out the finer details and figure out how many times we should repeat something, where a riff should go, how it should transition, etc. It’s a group effort and a lot of arguing before we finally end up with a finished product (which we will still argue about and rearrange five times in the weeks to follow).

Dead Rhetoric: One of the things that initially drew me to The Kennedy Veil is the excellent cover artwork by Ken Sarafin. How much direction did you give him on this? Is there any story behind the cover?

Seeber: We gave Ken a good amount of direction, but he really helped narrow that focus and asked a lot of provocative questions that we hadn’t even thought of to get our ideas out to him better. The concept is basically a morbid portrayal of the biblical Trinity. Not so much the father, son and Holy Ghost, but death, pestilence and war.

There seems to be much talk of religions and manipulation throughout the songs. Lyrically speaking, what is the “Trinity of Falsehood?”

Seeber: The “Trinity of Falsehood” is the concept of mankind being misled – of being manipulated in order to create a separation in our species to create war, confusion and violence. To make brother turn against brother instead of creating unity which would help us stand together as a strong force to evolve and progress. This force or “Trinity” is neither God nor devil, but rather powerful sinister specters that are hell bent on eradicating man and its inhabitants.

Dead Rhetoric: Seems like you guys are really pushing yourselves in the promotional department, actively responding in social media outlets like Facebook posts. What is the best way to get your name out there at this point, outside of writing a face-melting album

Seeber: I feel like audience interaction is a big part of getting our name out and growing a fanbase. When I was younger, I always thought it was really cool to send an email to someone you look up to asking for advice or even just to say you enjoy what they do, and getting a response back from them. If you don’t have time for fan interaction, then what are you playing death metal for? ‘Cause I’m almost positive it’s not money!

Dead Rhetoric: Do you have any future touring plans in the works? What’s next for The Kennedy Veil?

Seeber: We plan on doing a lot of touring and shows in support of Trinity of Falsehood for 2014. We just got on board with Rock the Nation USA and look forward to working with them on more tours in the future. Our first tour working with RTN will be “Decimating the West.” A short west coast run with label mates ARKAIK and Lord of War. Rest assured, we will be making our rounds this year in support of Trinity of Falsehood! 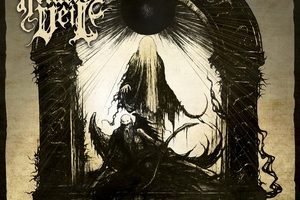