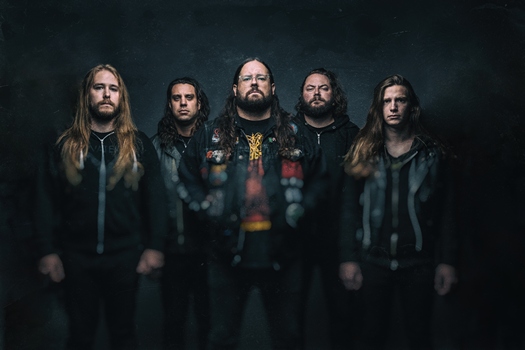 Never a band to rest on their laurels, The Black Dahlia Murder have been fine-tuning their particular brand of death metal for almost two decades now and continue to elevate their material. Upcoming record Verminous is a shining example of this, with further tweaking and allowing for more melodic showcases and tempo changes, all while keeping the band’s trademark sound intact. We spoke with vocalist Trevor Strnad about his thoughts on Verminous, underappreciated songs/albums, what he sees in terms of innovation in death metal, and much more.

Dead Rhetoric: How does Verminous compare to the rest of The Black Dahlia Murder’s discography – what makes it stand out?

Trevor Strnad: I feel like it is still recognizable as The Black Dahlia Murder right out of the box, first listen. but I feel like we tried a lot of new things with this record. I think it’s the most ambitious thing that we’ve ever released, in terms of variety between songs and dynamics. We really tried to pull out all of the stops in those regards, and tried to make some songs that would really last and have an anthemic feel to them.

There’s some new influences creeping in a bit from Brandon [Ellis]’s point of view, him being the new guitarist and half of the creative force in the band now. He’s brought in some new elements. Some classic heavy metal, some King Diamond-esque influences here and there with “The Wereworm’s Feast” being one example. So we are just trying to make the most colorful album that we can.

Dead Rhetoric: Some of the melodies really stand out to me with the first few listens. Would you agree with that?

Strnad: Yeah, it’s a very melodic record. There’s a lot of melancholy tied in. There’s some really sorrowful passages tied in. That’s something we’ve been trying to do more of in the last few years – make the music more emotive. We are trying to grip people on an emotional level.

Dead Rhetoric: I’ve also noticed the last few albums have been around the 35-ish minute mark. Do you feel the music is more digestible this way?

Strnad: Yeah – I think especially for us, being a very aggressive band – I l feel like we may have dialed it a little bit with this record compared to Nightbringers. But usually, around that mark – I feel like it’s more important to have a record that people want to make it all the way through. It shouldn’t exhaust the shit out of them. We kind of look to Reign in Blood for an example. It’s a short record, but it has everything it needs in it in that short amount of time.

Dead Rhetoric: I think too, when you extend that run time, things that to sound the same, when you are dealing with extreme music.

Strnad: Definitely – that’s been such a battle for us, creatively. Making that variety happen between songs. Even though we are fast band overall, we don’t want the music to feel like static. We don’t want to be ‘in the red’ at all times. It just becomes boring.

Dead Rhetoric: Are there any specific lyrics that you are proud of with Verminous?

Strnad: First thing that comes to mind is “Removal of the Oaken Stake.” The song is about a vampire who is staked through the heart hundreds of years ago and he’s just a skeleton sitting in a casket collecting dust. But he’s still conscious and collecting dust. He’s sitting there, waiting for the day that someone is going to pull the stake out and he can regenerate. But he’s sitting there as human history goes past. I really like the lyric. It’s a concept that I’ve been sitting on for a long time. When I heard that song for the first time, and the melancholic feel, I thought it would honor the idea of being trapped in a purgatory.

Dead Rhetoric: So do you feel that it’s easier or harder to write lyrics as you continue to go on as a band?

Strnad: It’s both. I feel like I have a lot more experience than the early days, and I know how to handle more technical music now. But it can be hard to think of something new. Really, coming into a new record is where I hit the roadblock. The first couple songs will be in my mailbox and it’s hard to make that first jump and set the pace for the record. Once you rip that Band-Aid off it’s a lot easier. But I still get a kick out of writing for the band and I try really hard to create a miniature story for each song. It means a lot when the fans pay attention to what I do in that regard.

Dead Rhetoric: You are getting quite the backlog at this point. Any underappreciated favorites from your discography, be it a song or album?

Strnad: For sure. I feel like Deflorate was glossed over a little bit. It was in the shadow of Nocturnal, a fan-favorite record. But with we have such a vast catalog now, like you said, that there are songs that are just destined to obscurity that we will never play live. Hopefully one day we will dust them off, but with each record, there are more and more.

We did play Nightbringers all the way through live on a few different tours, but that’s not really typical for us. But there are some deep cuts from say, Abysmal that I would like to play, like “That Cannot Die Which Eternally Is Dead.” I think that was Ryan Knight’s last great song that he wrote for the band and I thought it was really cool. There’s a lot I would love to see dusted off in time.

Dead Rhetoric: There’s not a lot of bands that can say that they have had such an extended time frame with one label. What can you say about your relationship with Metal Blade Records?

Strnad: It just started on such a family note. I think that Brian Slagel kind of saw his younger self in me. Me, being completely obsessed with metal and a total hound for the underground and trying to know about every single band. He saw that we were honest about what we were into. We were very hungry out of the gate, and they backed us up and put us on tours. So it’s just been a great relationship with those guys. We party every time we see them. I feel for a lot of my peers that have to change labels. I can’t imagine what that’s like – to lose backing and go into another scenario and not knowing who you are working with yet. It just seems like a lot of tumult that we are lucky to have side-stepped.

Dead Rhetoric: You also have the Blast Fiends fan group. How do you view the relationship you have with them as well?

Strnad: It’s crazy! They have really established a collecting culture for what we do, and have an emphasis on that. They’ve been really showing up for the last two records especially, as the group has come into full swing since then. It’s a huge honor to have people loving you at that rabid, kind of Metallica fan level, you know. It’s super flattering.

I peak into the group to see what’s going on every once in a while, but it’s not us that oversees it. Which I think is a good thing. We have quite a few admins over there that are long-time friends of the band, and I think it’s been a really great thing. It means a lot to see Blast Fiend patches on people’s jackets with different state logos and chapters. It’s really taken on a life of its own and it’s awesome!

Dead Rhetoric: I think it’s pretty cool – you don’t see that a lot with the more underground bands.

Strnad: It’s cool – we are very thankful for the guys and all the hard work they do. They are really street-teaming us on the ground level and pulling for the band. It feels great to have that there. It’s encouraging.

Dead Rhetoric: The band’s fanbase has obviously gotten bigger over the years, but you’ve also increasingly gone out with bands that aren’t necessarily sounding like you. What have you learned from going out with different bands over the years?

Strnad: There’s a lot to be learned from all kinds of music. Going on with Black Label Society, for example, seeing the way that they do things on stage. They are very professional, their crew is also very professional. Touring with Meshuggah – that was probably the biggest lesson. Seeing how they work, it’s like the most well-oiled machine I have ever seen on tour. Incredible production, incredible show, and they are super nice guys.

I see this band [The Black Dahlia Murder] being a misfit band. It started with us not quite looking how people expected us to look for a death metal band. It spiraled out of control for them. Me being a spectacle-wearing, serial killer-looking weirdo has helped us stand out accidentally. It’s given us appeal to all different walks of the underground somehow. There’s people that call us a deathcore band, a metalcore band, death metal band, or anything in between. I don’t care what they think it is – if they like it, then I’m just thankful that they are part of this.

Dead Rhetoric: With your nose to the ground with your Metal Injection column, what do you see as ways that bands are innovating in extreme music?

Strnad: The first thing that pops into my mind is Blood Incantation. They are really pushing the boundaries right now. It’s very old-school informed, but the way that they are able to make a 3-dimensional song is really impressive and pushing the envelope as far as using different effects pedals and spacey-approaches. I think it’s really cool.

Then you have your super polished tech death. Every 6 months people get faster and better at playing. There’s always an Olympic aspect to certain corners of death metal that are being pushed at all times. The underground is so fruitful right now. Death metal exists in so many different forms and it’s poppin’ off. It’s a great time!

Dead Rhetoric: What would you like to see from underground metal in this decade?

Strnad: I am loving the return to old school. There’s so many young bands that are coming out, and instead of just trying to play fast – it’s about playing something that’s atmospheric. I feel like that really honors the initial death metal statement. Death metal was made by a bunch of clumsy kids, who weren’t necessarily virtuosos at their instrument. All they were trying to do was make a horror movie soundtrack, in a way, so I definitely like that. I hope that kind of keeps up in the coming years. I love that timeless, old school death metal.

Dead Rhetoric: If The Black Dahlia Murder was the soundtrack for anything, what would it be?

Dead Rhetoric: Given the question marks in the air right now, what’s down the road for the band at this point?

Strnad: The Testament tour is not looking good at this point, which is a bummer. But we have some outdoor festivals booked for the end of the summer, and we are still praying that those will be going on. Past that, we are booking another North American tour for the fall, which we will be headlining, and we have some great bands lined up for that. I can’t reveal too much at this time, but if anything, I am hoping we will be right back grinding it out by then.