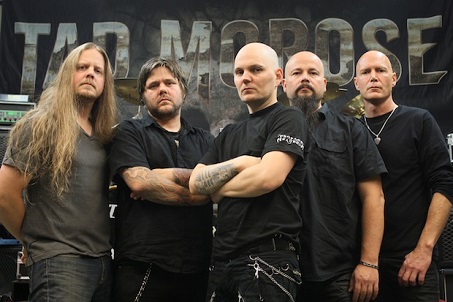 Their name taken from a buried Michael Schenker quote; their sound somewhere beyond the restrictive confines of European power metal, Sweden’s Tad Morose approximately ten years ago were ripe to be one the torchbearers for traditional metal through the 00’s. They had all the ingredients: A powerful, melodic vocal presence in Urban Breed, dueling, attack-ready guitars, and songs that were just about as immediate and anthemic as one could ask for. It all came together on 2003’s brilliant Modus Vivendi, an album that upped the band’s status considerably, while garnering near-unanimous positive critical reception. This rare perfect storm rarely happens for bands, so you’d think Tad Morose would quickly capitalize upon it…

Unfortunately, the band never did. Breed left in late-2005, placing the band in a transitory state that took eight years to fix. Along the way, they added then split with former Liege Lord/Annihilator vocalist Joe Comeau, were dropped by Century Media, and became practically an afterthought in the European metal scene. Tad Morose nearly called it a day, but after circling the proverbial wagons and landing Steel Attack vocalist Ronny Hemlin in 2008, work began on the band’s Revenant comeback, which will see the light of day this November.

Revenant can’t match Modus Vivendi blow-for-blow, but it does put the Swedes back into the conversation, something founding member/guitarist Christer “Krunt” Andersson was happy to discuss when he phoned from his Swedish homebase. Here’s what transpired…

Dead Rhetoric: I caught you guys at the 2005 Powerfest in Chicago and remember spending time with the band at Hooters before the show, but, there was no Urban. Was that perhaps a good indication of the divide that existed in between the four of you and Urban? [Yes, Hooters, but it wasn’t my idea to go – DEG]

Christer “Krunt” Andersson: He’s always been kind of an “oddball,” but that’s fine – everybody can be whatever they feel like being. The last couple of years when he was in the band, he put more and more distance from himself and the rest of the band. Like the Hooters thing, whenever we were on tour, he would just stay on the bus or in the restaurant and kept to himself.

Dead Rhetoric: Were those types of things happening during Matters of the Dark too?

Andersson: I really started to notice a huge change in his behavior after we did a tour as a support band for Edguy. After that, it totally changed, if you asked me. He had always been a strange guy in a way, but after that, it was really hard, even impossible to work with him. He had “Lead Singer Disease” or “Rockstaritus,” or whatever you want to call it. [laughs]

Dead Rhetoric: We could say that Modus Vivendi was your strongest album and in my opinion, your best. Did those type of things affect the recording of that particular album?

Andersson: Yeah, I agree with that as well. In a way, it’s a pity things turned out the way they did. If he hadn’t started to behave the way he did, I don’t know where we’d be today. Things happen for a reason…I don’t know.

Dead Rhetoric: After that, you got Joe from Annihilator to do vocals, but nothing really went anywhere. What happened with him?

Andersson: When Urban left the band or he got fired depending on who you asked, he left the band one or two weeks before we were supposed to go into the studio to record the follow-up to Modus Vivendi, so that put us a really weird situation with the studio and the record company…it was really not a favorable situation. We just totally lost momentum for a while. I don’t know if it was a month or half a year or something after that in which we decided to pick up the pieces and move on. We started listening to some vocalists and a friend of mine said, “Why don’t you give Joe a call?” And I thought, “Well, he lives in America, so that’s hard to make that work.” Then again, I talked to him and he was like “Fuck yeah. Send me over something so you can hear my vocals.” And he was by far the best vocalist.

We talked about that, like, “How the hell are we supposed to make this work?” So we tried that, we did a couple of shows and some demo recordings, but in the long run, it didn’t work out. He was a pretty occupied guy and it was really hard to work as a functional band, having him in America. It didn’t work out. It’s kind of sad – he’s a really nice guy and great musician.

Dead Rhetoric: You entered this dead period where you didn’t do anything as a band. Did you start to think there may never be another Tad Morse album?

Andersson: Yeah, of course it did. At one time, it was just me and Peter [Moren, drums]. We talked to each other and said, “Let’s just fuck this and do something else.” But he said, “What should we do?” So we thought what the hell…all of the sudden we had a functional lineup, doing some shows, working on the new songs and recording, whatever for quite a few years.

Dead Rhetoric: And like we talked about, you had such great momentum coming off Modus. Now, do you see it as a big missed opportunity that you never followed that album up properly?

Andersson: Of course. We had been working hard for a lot of years, so to actually start and have the pieces fall into the place and think we have something good going on here…then something fucks up everything. One portion was Urban, but I shouldn’t be blaming him – I’m sure he has his reasons for leaving the band, but it was one way that it turned out like Murphy’s Law.

Dead Rhetoric: What happened with Century Media then? Did they decide to just move on?

Andersson: I can’t blame them. They believed in us for quite some time. Every now and then, they’d give me a call to see what was going on, but after a few years, they called and said “Fuck off.” It was like…yeah, I can understand that, no hard feelings. They had to spend their time on more important bands, so to say.

Dead Rhetoric: Moving on, how does Ronny enter the picture?

Andersson: Ronny, he lives an hour south of where we live. We’ve known about each other since our early teens, and he was asked to join Tad Morose before Urban Breed. That didn’t…I don’t remember, but directly after Urban left, he was the first guy we called and it was really close he joined the band back then, but he was too occupied with Steel Attack. The rest of the guys in Steel Attack got cold feet about him joining Tad Morose. He decided to just to stick with Steel Attack. Then, we were desperate and talking with Ronny, he thought, “Oh what the hell, I’m going to join!”

Dead Rhetoric: In some roundabout way, Ronny is really your first choice all along.

Andersson: Yeah, he was!

Dead Rhetoric: The songs on Revenant, were some of them meant to be on the immediate follow-up to Modus, or are they new?

Andersson: Both. Some of them are very old, so to say. Others, I can’t remember because we re-wrote some of them, but weren’t complete songs, but the basic ideas date back to Modus Vivendi. It was during this ten-year period, we thought maybe we should trash all of this stuff and start recording brand new songs, but I thought that’s not wise because I really like some of these songs. We stuck to the songs we really liked, and wrote new ones.

Dead Rhetoric: Going back to your Black Mark days, those were interesting times when the label was doing really well with Bathory and Edge of Sanity. What do you remember most?

Andersson: We were perhaps the smallest band on their roster. They treated us fairly well. Back then, we were really disappointed about them. We never thought they were doing what we thought they should be doing and blah, blah, blah, but as you get older and spend more time in the business, you realize they did what they were supposed to do. The reason we didn’t hit it big back then was because we weren’t that good. [laughs] But that’s that. When you’re around 25 years old, you’re a bit naïve.

Dead Rhetoric: And back then, you were straight doom, you had elements, but you fell in between.

Andersson: It’s been the same thing throughout all the years – we just write music and it turns out the way it does. Since everybody contributes to songwriting within the band, it differs a bit depending on who’s in the band. Everybody adds their colors to it.

Dead Rhetoric: Was A Mended Rhyme where you got things figured out direction-wise?

Andersson: I think it was more on the Undead album where we stopped using a regular keyboard player and brought in a second guitarist. When the keyboard player left the band, we thought “Should we get another keyboard player, or look for another guitar player?” It was agreed about the guitar player to make the sound a little heavier, but when you’ve been playing for a while, you discover playing all of those weird time signatures is not really that fun. We never were that tremendously talented musicians; that’s a lost race anyway. I couldn’t really care less – I just want to go on stage, play our songs, and have a good time.