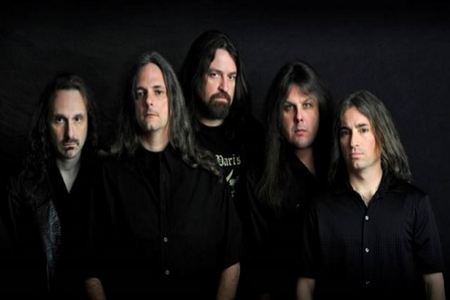 Back in the 1990’s when this New Jersey progressive metal act began, if you lived in North America, you needed to find a cool record store willing to import their records or seek out some pricey mail order services. Fortunately in 2015, their consistency in being one of the leaders of the genre gives Symphony X high priority worldwide when a new release hits the streets. Underworld is their ninth studio record, providing the listeners a history lesson in the past, present, and future in terms of style and substance.

All facets of Symphony X appear: heaviness, melody, neo-classical fury, and classy top to bottom songwriting – but who would really doubt their ability to hit another home run? The band offer up new records in a 3-5 year time frame, never overstaying their welcome and keeping anticipation on high. A favorite of the ProgPower festival too, making multiple appearances right from its inaugural edition in February, 2001 can’t hurt the profile either.

Guitarist Michael Romeo takes us into the world of Symphony X, very calm and measured in his thoughts. You will learn more about the band’s health issues, benchmark efforts in their discography, why full-length albums still matter, and the state of guitar playing today considering the short-attention spans of the younger generation. Engage, dissect, and probe into this fine American progressive metal act – there’s plenty to treasure.

Dead Rhetoric: Did the heart issues of drummer Jason Rullo factor into any possible delays of Underworld’s release? And how is the state of his health these days?

Michael Romeo: No, actually not at all. He said he’s been doing (well), I talked to him the other day. During the recording, he might have been a little hesitant getting into the studio, probably worried about pushing himself a little too much. I think anybody in that situation, you are going to be a little cautious at first. He’s feeling good and doing everything his doctors have been asking him to do. He sounds good, obviously touring is a little more of a brutal thing but he’s feeling positive. It’s really his decision- his health is the most important thing. We will be getting together to rehearse next month, and I think everything will be alright.

Dead Rhetoric: It’s not the first time health concerns have come up, as bassist Mike LePond deals with Crohn’s disease…do you find it’s even more important now to take better care of yourselves on these longer touring excursions?

Romeo: Oh yeah- we are all trying to do our best as we are all getting older. Some of these things put a little bit of light on reality. It makes you kind of realize what’s important, its life you know.

Dead Rhetoric: Underworld is the ninth Symphony X studio album – what are your thoughts on the songwriting and recording sessions, as it appears to my ears to be a great amalgamation of your entire repertoire of neo-classical, progressive and heavier metal styles?

Romeo: Yeah, exactly. That’s really what it is. We talked about…with every record the normal mode of operation is we’ll talk a little bit about some ideas, what we want to do with the music. Every album we try to change it up a little bit – Iconoclast was a bit more heavy, The Odyssey was a little more symphonic, the V record was a little more progressive. We always stay within those bounds at some point- that’s always our thing, but try to make each record different. So for this one, it was the same kind of thing. We talked about the basic ideas of the songs, Dante’s Inferno, and some cool stuff for the lyrics. One of the big things that was different about this one was, you always try to write great songs and you want to do your best- but we were very critical about the songs and conscious to the flow of the record. Before we even wrote a note, it was mapped out. What kind of song here would go into this – as you are writing you are conscious of some of these things. Maybe this tempo feels right going into this – or maybe this key of the song. Normally we never do that- and on this one we did.

To think of the record as a flow, one song to another. And of course you are always trying to concentrate on each song, making it its own thing. We would give one song a nod to one of our older records, the guys who like Iconoclast will find the heavier stuff is still there, there is also some melodic and progressive stuff on there. A little bit of everything we’ve done, and different things too. Having that framework instead of going nuts, that helps.

Dead Rhetoric: I appreciate the fact that you take great care in giving your fans a full album experience. The industry has shifted to more of a singles marketplace again… which I feel is a shame as many aren’t willing to spend 40-60 minutes anymore absorbing full-force the art and craft of a record… have your thoughts about albums changed from Symphony X’s early years to now?

Romeo: That was one of the reasons. Everything that you just said was the start of it all. I think metal bands, we’ve always tried to do records, at least most of us do. It’s what we grew up with. There may be some that concentrate on (a) single and pop (music), we’ve all got hectic lives so it’s hard to take out some time and really listen. That was a part of that whole conversation- I had seen a documentary when we started working on this, it was about some music industry people, managers of bigger bands, and they were saying it’s such a shame that there will never be any more great albums because people don’t have the time to listen to a whole record. A lot of artists don’t want to bother with it because they are worried about a single. That stuck in the back of my head, that’s messed up. Let’s really try to write a great record, and hopefully the people that will sit and listen, give it a little bit of time they’ll really appreciate it. You can’t make anybody do anything they don’t want to, but you can at least do your best on your end.

Dead Rhetoric: You’ve also tried to balance out the music side with some interesting artwork – what are your thoughts on the current cover?

Romeo: I think it’s right on point. The same guy Warren Flanagan- he’s done the last two with us. He’s just great, you don’t even have to tell the guy anything, other than a couple of points of what you are doing with the music and he gets it. He’s a professional artist, he works on these big Hollywood films and that whole cinematic feel- it’s a little bit deeper than just making some basic artwork. With this one, all I really said to him was that we were bouncing around this idea of Dante, the Inferno, the Underworld, and going to hell and back for someone. It sounds really dark, heavy, a couple of things we threw in with the lyrics and the number three because of Dante, he picked up on all this stuff. He designed the nine symbols and the nine circles of Hell, he did that on his own. He did a little research, being a little creative. More of an iconic cover, I think he did a great job.

Dead Rhetoric: Russell spends a lot of time delivering some solid melodies and impressive emotional range – specifically on tracks like “To Hell and Back” and “Without You”. Does he continually surprise you with his ability to take Symphony X into heights other progressive metal bands wish they could attain?

Romeo: (laughs) Does he surprise me? Not really, because I know how good he is (vocally). With these songs… we all know what’s required. Especially him, here’s this ballad, he takes it and really delivers what’s right for the song. We’ve been together for so long, I think we all have that. When we are recording there are very little disagreements, it’s kind of given. Obviously he isn’t going to scream over it, Jason isn’t going to play thirty thousand drum fills over this, we do what’s right for the song. Russell gets in there and brings the whole vocal performance up.