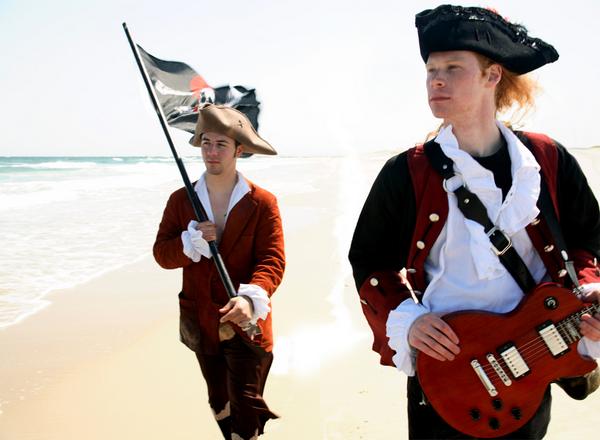 Swashbuckle don’t play metal of the sea-faring variety (read: Alestorm, Ahab, et al), rather, they take on the role of filthy, totally aggro Pirates. You know, like the ones out in Somalia who think it’s their birthright to capture cargo ships. Swashbuckle isn’t from Somalia and they don’t look like Captain Jack Sparrow – they’re from New Jersey, who depending on who you ask – is as murky and ugly as the infested waters in which Pirates sail. And their music is decidedly thrash-oriented, which makes the trio all the more threatening.

Currently criss-crossing the globe in support of their excellent Back to the Noose album, Blistering caught up with bassist Admiral Nobeard to talk about all things Pirate-related. We mean ALL things Pirate related…

Blistering.com: I live in Pittsburgh and we have a supposed Major League baseball team by the name of the “Pirates.” Do you take that as an insult?

Admiral Nobeard: Only if they don’t steal the bases.

Blistering.com: On a more serious note, you have the “gimmick” of being pirates from New Jersey, although your music doesn’t sound very pirate-oriented. It’s very thrashy, extreme, too. What gives?

Admiral Nobeard: Thrash is fucking fast, aggressive, brutal, dirty and raw, just like piracy. They raped, pillaged, murdered, stole, and got fucking scurvy, so if you think thrash doesn’t fit the pirate lifestyle, you are sorely mistaken. Sure, epic sounding music and sailing the seas on quests for glory sounds great and all, but that’s some straight-up fairytale shit. Pirates fired chainshots at your mast, raided your vessel as fast as possible, slit as many throats as they could, and set your fucking ship on fire, so a blazing fast 2-minute song seems perfect for it.

Blistering.com: If you took away the Pirate angle, the music could stand on its own, methinks. Did that ever cross your mind – drop the Pirate slant and be a regular metal band?

Admiral Nobeard: What’s a “regular” metal band nowadays? Everyone sings about specific things be it Vikings, pagan rituals, Satan, gore, toxic waste, zombies, horror movies, political agendas, taking out the trash, getting fucked up, I mean everyone has what they sing about. We play metal and sing about piracy and other goofy shit. Why be regular when you can do something that you enjoy and that’s fucking fun?

Blistering.com: To that end, was the band formed as a direction reaction to the serious, poe-faced nature of metal?

Admiral Nobeard: No, we got together because we wanted to play metal and sing about pirates. We just happen to be goofy assholes who don’t take things that serious and love fun. We take our music seriously, as for lyrical content, not so much.

Blistering.com: Listening to the album, you would think there are more than just three of you in the band. Why does Swashbuckle sound more musically “full” than most?

Blistering.com: What makes Swashbuckle better than Alestorm? I know the two of you will forever be linked…

Admiral Nobeard: We have bigger “guns” than they do.

Blistering.com: Clearly, a lot of time has gone into the overall image/marketing side of the band. Since the underground is crowded as fuck, do you find that doing anything and everything to gain a promotional advantage has helped the band?

Admiral Nobeard: Any promotion is good promotion, be it the slightest gesture to a most lavish promo assault. More people know of the band, so it’s helped a good amount.

Blistering.com: You were discovered via a Myspace contest. I would imagine you have caught some flak for this. Your response was?

Admiral Nobeard: Yeah, we’ve taken some flak but we’ve been shit on before, so it’s old hat by now. A majority of the response has been pretty positive, so that’s fine with me. I’m just thrilled Nuclear Blast enjoyed our shenanigans and wanted to put out our record. They’ve been nothing but awesome to us, and we couldn’t ask for anything more.

Blistering.com: Back to the Noose – it’s broken up nicely with these lovely little interludes. Genius or luck?

Admiral Nobeard: Neither. We just listened to the songs after recording them and pieced up the track listing, pretty simple.

Blistering.com: I didn’t realize “Scurvy Back” was a take on Justin Timberlake’s “Sexy Back” until a few weeks after I reviewed the album. Do you expect others to be that slow in realizing this?

Admiral Nobeard: ‘Bout time someone got that one. It’s our little stab at pop music, so hopefully some people pick up on it. If not, it’s not that big of a deal.

Blistering.com: You recently played Wacken – describe that experience and did you catch Running Wild?

Admiral Nobeard: It was fucking amazing, being able to take part in the fest. We never thought that we’d be playing Wacken. It was nuts – thousands of metalheads circle-pitting, head banging, singing along, and doing the waves of death. It ruled. Unfortunately, we weren’t able to catch Running Wild’s set, since we were flying over the night they were playing. I heard they were fucking killer though, and I’m stoked to pick up the DVD when it comes out.

Admiral Nobeard: We hope for some seriously fun times. It’s a killer lineup, so people should be coming out to party, mosh and sing along to all the bands.

Blistering.com: Somali Pirates – worth being afraid of or no?

Admiral Nobeard: After Paganfest, we’ll be doing a couple dates on the Ensiferum/Hypocrisy tour in the States in Novemeber/December. The end of December, we’ll be heading over to Europe again for the Darkness Over X-Mas tour with Dark Tranquility/Heaven Shall Burn. 2010 we’ll be touring the states and Europe again in support of the record, and we’ll be working on a bunch of new material as well. So we’ll be busy pirates, thrashing and pillaging cape to village! 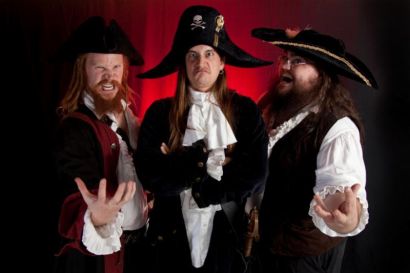