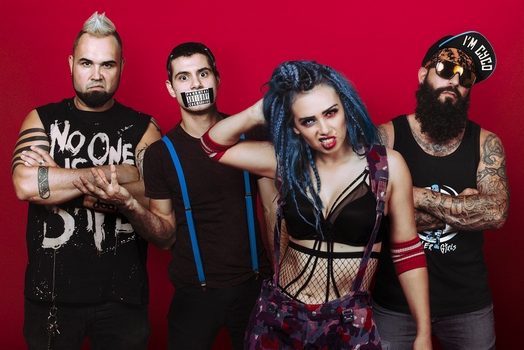 Dead Rhetoric: I saw a recent Pledgemusic video you made – is that your way forward, along with being independent?

Sweetnam: Yeah, it’s a tough question – we started off super DIY almost to rebel against my past in a way, being so used to when I started out, having 30+ people involved in my career, and you sometimes just get lost in what the real art you want to portray is. You’ve got to deal with so many opinions and there’s big money involved. A label is paying for things, and they are invested in it as well. It’s not as free to do whatever you want to do. So I started that way partly as a rebellion, but also because I just wanted to prove to myself that in starting out so young, that it wasn’t some lucky break that I just got, and I’m never going to be able to do music again.

I really had to prove to myself I could do this, and could do it in a way that was different to the norm. One of the first things I did, before I even got signed when I was really young, was making my own music videos. This was before YouTube was a thing, and I think it sparked interest for a label to get involved, because I was willing to go above and beyond – I wasn’t just going to sing and be a pretty face; I could do more things to get people into the music. At the time it was some behind the scenes videos and music videos myself. But when I got into Sumo Cyco, there was so much I could learn – doing it yourself…everything from starting a band for the first time and figuring out how to turn it into a touring band, budgeting for tours, running an online store, figuring out how to make music videos, and doing all of our social media and promotion. All of this stuff that it takes to be a working band.

It’s awesome being independent, but there are also cost as well. There’s only one of me, there’s only 4 guys in the band. Luckily, we’ve gotten a few extra people who are in the Sumo Cyco crew that have helped us out along the way, but we are spreading ourselves thin. There’s so many creative projects that I’d love to work on; you literally caught me driving the tour van when you first called, I don’t have time for just chilling out and writing songs. Long story short, we aren’t opposed to working with other people – labels, management – we just started working with a new manager. We are very open to partners. Because I now know what it takes to operate a band, I am sure that anyone who we get involved with is going to be very clear on where they stand, where the boundaries are, what their creative vision is, and it’s going to be very well put-together and with purpose.

I think too many bands rush into the idea of “Oh my god, I have to get signed” that they forget how everything is done, or will sign any contract, and in the long run, you are stuck with a company that maybe doesn’t get what you are trying to accomplish and you have to do like 5 records with them. Your whole career is stuck working with someone that you don’t get along with. Having that experience in my past, I think Sumo Cyco is in good hands moving forward, the fans are definitely going to get a clear vision of what we want to be. Whether that’s independent or with partners, it’s going to be all us.

Dead Rhetoric: Again, moving back to your past… would you ever consider taking one of your old solo songs and converting it into a Sumo Cyco song?

Sweetnam: It’s funny because there have been a few requests for that, especially with some of the more known songs I’ve had for that. But I don’t think it’s going to work. My guitarist, Matt Drake, who is the guitarist for Sumo Cyco, was playing with me through those years, and he and I have both had to go through many days of just playing one or two songs over and over again to the point where we are tired of them. I don’t know if there would be a song that has been released that we would rework, but there are actually a couple of songs from back in the day that Matt and I wrote when I was doing more pop stuff that could definitely work for Sumo Cyco if we amped it up a bit. You never know, one of those songs may pop its head out at one point.

Dead Rhetoric: What are you plans from here? I know you are mid tour [with Butcher Babies and Nonpoint], but are you looking to put out another album or an EP?

Sweetnam: We released “Undefeated” earlier this year, which was a stand-alone single to help promote the UK tour and this US tour. We have had a little bit of time to work in the studio and got about 4-5 songs kind of down. But I think that’s definitely the next step. After every tour, I get this antsy feeling to get back in the studio and take some of the inspiration from being on the road and traveling and put that into the music. So as soon as we get back, we will be right in the studio. It doesn’t take long for us to get bored [laughs]. We are going to be working on music, and I’m sure fans will be hearing really soon if we are going to try some crowdfunding maybe, or do something a little different than the typical record. Maybe we’ll try an EP…I’m not quite sure yet.

I’ve got to get my creative juices flowing next for the visual aspect and the music aspects. I’m always a big fan of those concepts in our albums – the second record was all about a train called Opus Mar, so I have to do some creative brainstorming to come up with what the next themes for Sumo Cyco are going to be. I think next year, we are definitely trying to get out there even more with touring. I think we are going to take a little break for the summer and fall to regroup and get back on the road with some new material. So people have a lot to look forward to!