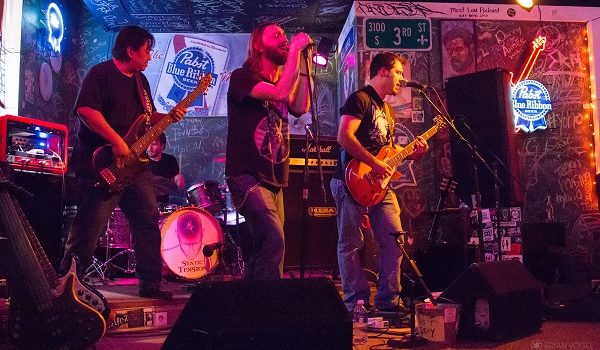 Grunge, the ever-infamous killer of ’80s glam and thrash bands, has enjoyed a mild boost in the credibility department as the years progress. Many are seeing the style for what it was: A more moody, less abrasive form of metal, dressed up (or down) with woe-is-me lyrics that bore relevance to Generation X. And while grunge may forever remain a metal outlier, there are those willing to give it the full incorporation, like Cincinnati’s Static Tension. The brainchild of guitarist Greg Blachman, the band originally formed in 1999, only to split two years later. Thirteen years would pass before Blachman would resurrect the band, with the resultant 2015 Rebirth EP setting the table for their forthcoming Out of Reach EP, which is due for a January release. Moreover, Static Tension are staunch proponents of the “progressive grunge” tag, something they alone can lay claim. (This scribe cannot think of another band going under such a subgenre descriptor). That being said, we sent over a few Q’s to Mr. Blachman to hear more about Cincy’s finest. Read on…

Dead Rhetoric: There was a 13-year delay in activity for Static Tension. What were you up to during that time?

Greg Blachman: After the original Static Tension lineup split in 2001, I played in a couple bands in college, but nothing that took off. From 2005-2009 I played Jimmy Page in a Zeppelin tribute band called Winds Of Thor. I started writing I released a solo album called Beyond Horizons in 2013 and played a series of shows in the Midwest to support the release as The Greg Blachman Band. I started working with Rob Rom and Ritchie Paik in late 2014 and we recorded a four-track EP called Rebirth in 2015 as Static Tension, which was a somewhat limited release. Since that time we’ve been working on the new EP due out in January.

Dead Rhetoric: Cincy isn’t considered (at least to my knowledge) much of a metal/rock hotbed. Does that make it difficult to maintain a band?

Blachman: I do think it adds a challenge. Venues here aren’t exactly bursting at the seams for local shows, which has left a limited number of options of places to play. I think that’s happening just about everywhere though to some extent. The financial realities of running a band can certainly wear you down in that climate.

Dead Rhetoric: What made the guys you currently have the right people for the band?

Blachman: Ultimately what makes it work is that we all share the same goals and enjoy the music we’re making together. The talent and experience is there, and we have been honest with each other from the beginning about what we all want out of the band.

Dead Rhetoric: “Progressive grunge” isn’t a tag thrown around too much, but, you guys make it work. What prompted you to come up with the term?

Blachman: The four of us all enjoy a wide variety of different styles of music but there is a common thread in that we all share influences from the grunge era. Our vocal style and lyrics reflect the grunge elements heavily, and mixing this with lengthy solo sections and odd time changes adds the progressive element. The tag seems fitting for our formula.

Dead Rhetoric: A regular stumbling block with progressive metal is that it’s too self-indulgent. Do you see Static Tension as a way to work around that problem?

Blachman: Progressive to me means that the music incorporates elements outside of the typical – intro, verse, chorus, verse, chorus, chorus – song structure. Odd timings, instrumental breakdowns, unexpected twists and turns – elements that make things interesting and leave the listener doing a double-take. That being said, song structure is important, otherwise you just have a series of riffs sewn together. We strive to make our songs catchy and structured while venturing outside the box just enough to make it unique. We also have no shame in reworking a song until we are all happy with it, or just scrapping the track entirely.

Dead Rhetoric: As was the case with the ’80s last decade, there’s a mini ’90s revival happening. Why do you think people are starting to come back to bands from that decade?

Blachman: Today mainstream rock and metal is overproduced to the point where much of the human quality and emotion is completely lost. The 90s was the last decade where being raw and unpolished was popular. I think people are looking back now with a greater appreciation of this and wanting to hear that raw, relatable, human sound again.

Dead Rhetoric: Realistically, what are your goals with Out of Reach?

Blachman: This is the first album we’re really pushing out to the metal community. We intend to throw it against a lot of walls and see where it sticks. Realisticallym our goal with this one is to let the metal community know we’re here, we’re serious about what we’re doing, and we intend to be doing it for quite a while.

Blachman: The rest of 2016 will be spent primarily polishing our live show – we’ve been recording for six months so we could use a bit of tightening up. 2017 will be spent playing shows to support the new EP Out Of Reach, and writing new material for the next album.