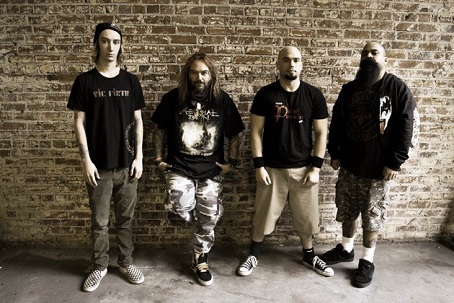 This is the second part of Josh Overbey’s expansive interview with Soulfly mainmain Max Cavalera. The first part can be read at this location. Max and Josh had just left with discussion on the various guest vocalists that appear on the band’s new Savages album…

Dead Rhetoric: Yeah, absolutely. And speaking of the younger generation of hard rock and metal, that segues into the fact that your son Zyon plays drums on this record. I read it was a very organic thing. You were looking for a drummer and Zyon just sort of volunteered. Was it really that simple as far as how it came about? I know a lot of your family has participated in Soulfly or Cavalera Conspiracy’s music. In fact, I think I remember it being Igor who played drums on “Troops of Doom” with Cavalera Conspiracy. And of course, Igor, Zyon, and Ritchie all participated on the “Revengeance” track and they all have their own projects going on between Incite and Lody Kong, so they’re definitely born and bred for music. But did you ever have in the back of your mind as they were growing up in this lifestyle with this love for music that one or more of them would be somehow involved a little more intimately with the Soulfly project itself in the way that Zyon has become?

Cavalera: No, it’s actually a real nice surprise for me. If you had told me 20 years ago that Zyon would be playing drums on my record, I probably wouldn’t have believed you. I would have thought you were crazy. So it’s really cool to have him, and for me, as a dad, it’s a dream come true to have that kind of connection. To look behind me every night and see my son on the drums is a killer connection and something that’s really cool for me. For me, that’s not very different from when I played with Igor, my brother, because that was a family connection I had, always looking back and my brother was on the drum kit.

Now I look back and my son is on the drum kit and it’s very similar. And Zyon plays very similar to Igor; they have very similar styles of playing. Even my approach with making music with Zyon is similar to Igor. I throw riffs at him and let him put the beats on top of it, let him do the thinking of what kind of beats are gonna go. I do not dictate what the beats should be. I just throw the riffs and let him put his mind to work and see what kind of beat he wants to put to my riff, which is normally how I work with Igor.

Zyon came up with all the beats on this album. It was all his ideas. From just listening to my riffs, he came up with his own trademark kind of beats, which made me very, very proud with how far he has gone from drumming on his chest when he was four years old, driving everybody in the house crazy, to growing up with Soulfly live and sitting down behind Roy Mayorga and Joe Nuñez. He sat behind Bill Ward. Watching all these drummers, that was his school. That was his university. We didn’t know that at the time, but what Zyon was doing was getting all the knowledge possible for drumming from those guys. Instead of going to drum school or someplace you go to learn drums, he learned it all on his own from watching those guys and imitating what they would do later.

And when Zyon started playing his own stuff, his own style, he accumulated everything he had learned over the years watching all those drummers from behind the drum kits and put it to work for himself, so I think it was a great method that Zyon used. All those years watching from behind the drum kits, there was a purpose, and I didn’t know at the time. For me, I thought he just liked to sit behind drummers. I didn’t know he was actually learning everything he knows now from that, so it was really great to watch him growing up as a drummer. It was really cool.

Dead Rhetoric: Definitely. Since that was a bit more of a personal question about the family, that leads me to my next question, which is about this autobiography you have coming out a little later this year. The last I heard it was set to come out between the end of November and Christmas time. Is that still an accurate timeframe for it?

Cavalera: They’re doing the contracts right now and we’re trying to find some more pictures. The book is already out right now in Brazil, but I want the American book to have more pictures, a few more live pictures that were missing in the book, so it looks now like January in America when My Bloody Roots is gonna come out.

Dead Rhetoric: Okay. Excellent. One other question I did have about that autobiography: I saw an interview with you not too long ago where you said one of the main ideas you wanted to get across with this book, the main theme, is the idea that growing up in a certain way with a certain lifestyle in Brazil, you came out of impoverished conditions and became a globally recognized figure in music. And you’re getting the idea across that, as you said, “If Max can do it, you can do it too.” Was that theme really the driving force behind creating the book, or was there some other moment of inspiration that told you you need to release an autobiography now or people need to hear your story for this or that reason?

Cavalera: It was a culmination of all that. We thought it was a great story. And we have so many funny stories over the years, so many cool stories that we used to spend nights talking about this stuff and be like, everybody should know about this, not just us in the family but maybe the whole world should know about these stories. That’s what became the idea of the book, and the other thing that made the book come around was the fact that the original schoolbook I wrote the Sepultura name on in Brazil, my mom sent me that book. It was the first time I wrote Sepultura in the book; there was like school writing and shit. They displayed that in the Rock and Roll Hall of Fame in a metal display. It’s so killer. We went last year and saw it. And the idea of going all the way from the middle of Brazil in poverty, no money, and creating music, making music all the way to the Rock and Roll Hall of Fame was such a journey that maybe this is the right time now. With the book in the Rock and Roll Hall of Fame, now it’s time to tell my story.

And then came the idea of trying to make the book as inspirational as possible for some people in both parts of the world that are going to read it. If you’re a musician, a young musician, I think you will read the book and feel very empowered, feel very much like, “Yeah, I can do it.” It’s really going to give you confidence that you can achieve something with your life if you want to, if you put your mind into it. And part of the book is like that; the other part is dealing with all the stuff that’s created so much controversy like the split with Sepultura. I finally put that to rest. In the book I put details of exactly what the people did, why they did, why that upset me, why I left the band that I created, and why I created Soulfly.

So it’s all there and there are some great people in it: Mike Patton’s in it, David Vincent, Sean Lennon, Corey Taylor, and Sharon Osborne. Dave Grohl did the introduction, so all these cool people are a part of the book and I couldn’t be any happier. I think Joel McIver did an amazing job. He did thousands of hours of interviews trying to remember my childhood and the growing-up years. Alcohol and drugs have corroded my brain but I can still remember some of it, but we tried hard to remember all the stories and they’re all gonna be there. So I think it’s gonna be a really cool book. I don’t think you even need to be into metal to read this book. I think somebody that’s not even into metal can read this book and find it very interesting.