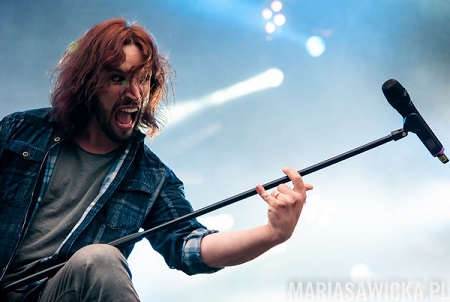 Dead Rhetoric: The song “Running Lights” on the new album can be seen as one of the songs that connects the old period of Sonata Arctica with where you are today. Was that one of those songs that came pretty easily?

Kakko: [laughs] It was meant as a bonus track for Japan. We started recording it and doing it and the whole song relaxed with the tongue-and-cheek style, and we wanted to go over-the-top, and back to that old style and give something the Japanese people they wanted to have. After we did the drums and guitars, the whole band realized that, “Dude, we need to have this on the actual album and not has a bonus track.” It brought the tempo on the album quite a bit. It has a quite a huge rise of value – first it’s a bonus track, then it’s the second track on the album. That’s odd. [laughs]

Dead Rhetoric: “Cloud Factory” is another fun one…

Kakko: That’s actually probably the oldest song on the album. I played it to the guys during the rehearsals for Stones Grow Her Name, so even then, it was an older song, so maybe I had it ready for a year or so, even the lyrics, which is weird since I usually wait to write the lyrics at the last moment. What you hear on the album is pretty close to what’s on the demo I played to the guys back in 2010…it’s a really fun song. It reminds me of something like Bruce Springsteen, like people being stuck in a small town with one factory that grabs generation after generation, and they’re unable to leave, in a pleasant way, slaves to the grind there.

Dead Rhetoric: You had a change in the ranks with Pasi (Kauppinen) joining in place of Marco (Paasikoski), who was with you for 12 or 13 years. How’s he working out?

Kakko: He’s a way more technical bass player than Marco was. Marco was originally a guitar player, but then became the bass player; it was the only option at the time when he started playing bass. He was not a natural bass player. Pasi has always enjoyed the bass and even teaches the bass, so he’s really technical, he can play a lot of stuff. He amazed me so many times on the recording. Even on the first track, “The Wolves Die Young,” before I start to sing, he had this bass solo – it’s pretty impressive when he does it live. [laughs] Other than being an excellent bass player and being one of the nicest guys you’ll meet in the business, he has his own studio, which is a cool thing. He’s worked for the band since For the Sake of Revenge live CD/DVD, and the Live in Finland DVD, and has worked on every major every release of ours since 2006. He also mixed Pariah’s Child, so he brings a lot to the table. We totally won with this change. It was easy.

Dead Rhetoric: Switching members is never easy – you know that.

Kakko: I would definitely call this “easy.” It couldn’t have been any easier. [laughs] It’s just like “Okay, perfect.” It’s hard without Marco; I’ve been with him for 20 years, even before Sonata Arctica. He was my first bandmate, so it’s going to be difficult touring without him.

Dead Rhetoric: Did you ever has this idyllic view when you started that your lineup will never change?

Kakko: Yeah, I think the band was started December 22, 1995. I joined it early next year, and that’s when [Sonata Arctica precursor] Tricky Beans was formed. That’s when it started, and after two or three years, we felt like we’ve been together with the same crew for ages and we’ll stay with these guys forever, and for a demo band especially here in Finland, being together for more than year is an eternity. We only had been together for a few years before we scored our first recording contract. But having been with Tommy (Portimo, drums) for so many years, he’s the only original member…it’s weird, but makes me value him more. We didn’t have an easy to start to things. He had to learn the double-kicks, and he just always rose to the occasion and learned. I didn’t let him go easy; I made him learn a lot of difficult stuff, which was not his natural thing at all. He’s more of a straightforward drummer. He’s learned and developed a lot over the years.

Dead Rhetoric: Finland isn’t a very large country, and metal in contrast to here in the States, is a popular and somewhat commercial form of music. So, you as a public figure – do you get noticed a lot when you’re out and about?

Kakko: It’s seldom that people come and talk to me. They may be intoxicated, or huge fans, but, everyone recognizes me in my hometown anyway when I go to the shop. They see me. They know who I am; I’m here all the time. It’s rare when someone asks for a signature. It happened more when we were fresh and exciting; it had that appeal because we were new. People get used to it. When I go on vacation and get some gas, and you’ll find people who ask for a signature, who are polite enough to talk to me. It’s nowhere near as bad as what Tuomas [Holopainen] from Nightwish has. A few weeks back, we had this session in Finland, and went to buy some liquor from the store, and this person who looked like he could be living under a bridge, he recognized Tuomas and said, “Hey Tuomas, what are you doing?” That was pretty bad and I’m glad I’m not that well-known in Finland. When he started recording his solo album that got the national news, so that’s pretty big.

Dead Rhetoric: You and Tuomas are long-time friends. What does the relationship mean to you?

Kakko: When something is really wrong with the band, it’s nice to have someone who can relate what you’re going through. That’s an important part of it. We have this hiking thing with a couple of Finnish musicians and we try to go hiking as much as possible. It’s quiet and nice in a place somewhere up north. It’s a great feeling when you can be with someone for two hours in silence and just walk, then decide that we’re going to eat something, and just be together as musicians with the same thoughts. During the nights, we build a fire, have a few drinks, and share thoughts. It’s fantastic.