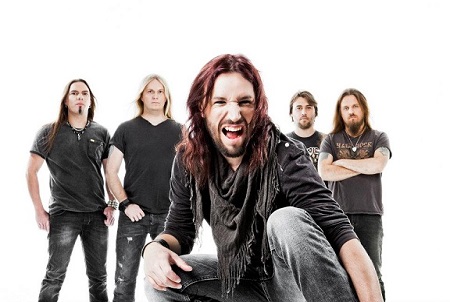 Nuclear Blast public relations queen Loana dP Valencia warned Blistering that Sonata Arctica singer Tony Kakko might be a little distracted during our chat because the Finnish national hockey team was playing during our scheduled time. And of course we understood – this scribe has spent countless Sunday afternoons ignoring the rest of the world while a certain football team from Northeastern Ohio was playing, so it would be no sweat if Kakko did some impromptu yelling at his television. Unfortunately, Kakko’s team lost, but throughout our 30-minute interview, the singer fit the bill as one of the nicest guys in all of metal. If it were reversed, there’s no way Blistering would have been able to speak coherently…or politely.

Kakko and Sonata Arctica have a new record on their hands in the form of Stones Grow Her Name, and it picks up where 2009’s strong The Days of Grays left off. Fully settled into their role as mid-paced power metal rockers, SA should have no problem convincing live audiences with the fun “Shitload of Money,” “Somewhere Close To You” and ballad “Alone In Heaven,” songs that according to Kakko, will be live staples for the next two years.

With the hockey game subdued in the background, we waxed on a multitude of items with Kakko, including the lack of speedy songs, the new album, Internet privacy, and Nostradamus. Here’s what the scarf-adorned frontman had to say…

Blistering.com: You’ve stopped doing fast songs, which is a big to-do with your fanbase. For you, how much of a challenge is it to stay in the mid-tempo mode and not deviate from the course?

Tony Kakko: I feel like an underachiever [laughs]. When I work, I have a piece of paper on my desk saying “KISS,” meaning “Keep it simple, stupid.” I wanted to cut down the number of parts per song. I didn’t want to go from A to Z, I wanted to A to C or maybe A to B, and shorten the songs. The majority of these songs are in the range of four minutes and it makes the whole album rock, I think. I wanted to pay a lot of attention to the fact we want to play these songs live and the melody should be sang by one singer, and not a choir. We had a problem with some of the songs, especially on the last two albums…and that is a problem when trying to make a song possible live. We can grab an acoustic guitar, go into a bar and sing these songs. And that’s the point.

Blistering.com: The song that has grabbed me the most is “Shitload of Money.” Anyone can sing along with that song, so that lends to the point you just made.

Kakko: I started playing around with my keyboard and I’ve been listening to a lot of Aerosmith, especially the Permanent Vacation album and ZZ Top, of course [laughs]. I started fooling around with sounds and I didn’t know I was writing a Sonata Arctica songs, which is a good starting point for songwriting. On the demo, I had lyrics that went [makes humming noise] and “Shitload of Money!” When Henrik [Klingenberg, keyboards] heard the demo, he said “There’s no way this song is going to be called ‘Shitload of Money,’ you have to change the title.” That was the exact point, so I was like, “No! That’s exactly what it’s going to be called.” If someone was starting hassle within the band already, then the general public will either love it or hate it, and that’s perfect.

I wanted to write a song about you cannot sell something you cannot buy back. A lot of people, especially on Facebook and other social media and they should consider this – they are putting their face and privacy out there and you can’t get it back. We’re going to play it next week in Spain and we played it on a cruise in Finland last week. We’ll try to play all of the new songs, but maybe not the “Wildfire” songs.

Blistering.com: This is your second album with Elias [Viljanen] on guitar, so is there more a comfort level with him now?

Kakko: He was really nervous recording The Days of Grays album since it was his first. He tried to do whatever I had demoed and it went all the way to a ridiculous level. If I had a little mistake or a wrong note, he re-did that [in the studio]. So I would go, “Why would you do that? It’s wrong!” Now he’s more relaxed and now we recorded the demos, something we haven’t done in 12 or 13 years. That helped Elias a lot because he had time to record different versions of the songs. He said he enjoyed this album and the style change…it’s served him well because now the songs are closer to each personal tastes in music, and his solo project, Evil Spirit, where he plays innovative instrumental music like Joe Satriani and Steve Vai, and has helped as well.

Blistering.com: “Alone In Heaven” and “Don’t Be Mean,” the two ballads – are they necessary evils at this point? Do you enjoy writing them or are they there to break up the flow of the album?

Kakko: There are some songs that I’ve written on piano that started as a beautiful ballad, but when I’m forming the album and it’s been evident we need faster songs, I’ve been forced to rape a beautiful ballad [laughs]. I have promised myself I would never do that again. I’ve written so many slow songs that I’ve started to keep them somewhere. A beautiful ballad would be a beautiful fast song as well. A good song is a good song…no matter how you do it, it’s still a good song. It comes down to the fact of what style of music the person enjoys. If you arranged our music in reggae, I’m sure a lot of reggae fans would enjoy it [laughs].

Blistering.com: With the fast songs and per the whole “challenging yourself” idea, how quickly do you think you could spit out an album comprised of all fast songs?

Kakko: Hmmm…I don’t know [laughs]. Hard to say. I always try to challenge myself and when I was writing those songs back in the day, I was trying really hard. When I was arranging them, I always tried to come up with some twist or turn, or something unexpected. It always takes time, and it’s not always easy. I think about if I just sat down and started writing, I’d have about eight songs in a week. I’d think if I did that, I could write at least one song per day. I should actually try that – good idea!

Blistering.com: I won’t take any credit for it, Tony.

Kakko: Yeah, I don’t think it would be released [laughs]. There’s bound to be some good ideas in there [laughs]. I could strip down all of unnecessary shit and take all the good parts and make one fantastic song.

Blistering.com: If you go back to the Ecliptica days, you had so many words to cram in per each song. With the new one, there’s seems to be a few focused ideas, which work really well.

Kakko: I enjoy writing stories. The more lyrics and the more twists and turns you can put in the lyrics, the better for me. That of course, is a nightmare when trying to do it live [laughs]. You have two or three pages of lyrics you have to remember. Somehow we always managed, but then another problem is I never gave myself any room to breathe. I’d sing a line, then gasp for air, then start again [laughs]. With this album, I tried to be as simple as possible, and rock albums don’t necessarily have ten pages of lyrical content. It’s something people can sing after you hear it a few times.

Blistering.com: Speaking of the old Ecliptica days, what do you remember most about that time? That’s when Stratovarius were immensely popular, and you were compared to them rather frequently.

Kakko: We were kids. We were really excited about the whole thing, like we got to go into the studio and someone else was paying for it. Of course, the band always pays in the end [laughs]. But still, we didn’t have to make our own down payment. And writing songs that we knew would be released someday, which was a dream come true. When it was released, it started selling like butter…it was fantastic and something we couldn’t understand. The same day when the masters of the album arrived and the record label was there and said, “Oh, you have some support dates coming up.” And we were thinking someone like Helloween was coming to Helsinki was coming, but he said, “It’s seven weeks with Stratovarius.” I was like, “Jesus fucking Christ!” I almost crapped myself [laughs].

It proved to be a great tour. It was our first time outside of Scandinavia. Seven weeks on a bus with Rhapsody, opening for Stratovarius and becoming friends with those guys. We had a dream start. I would happily give such a great start for any starting band.

Blistering.com: What kind of things did you learn from Stratovarius?

Kakko: We did see them on 60 shows that year. That was one thing – seeing your idols onstage, doing big things, so you learn from that. Then of course, we’d talk to the guys as well about the business, especially Jorg [Michael, drums]. He wanted to know what we did and wanted to take care of us so we wouldn’t be doomed at such an early age and not put our names on paper. We learned a hell of a lot, and we owe them a hell of a lot. It’s safe to say that I probably wouldn’t be talking with you if there wasn’t Stratovarius at some point. I might be in a reggae band…who knows [laughs].

Blistering.com: We were talking about social media earlier in regards to “Shitload of Money,” but you were ahead of the game with “Blank File,” which you released in 1999. Did it ever dawn on you that were at least, slightly prophetic with how strong of an influence computers would have on the world?

Kakko: Yeah, on the last tour I realized that. We put “Blank File,” in the setlist and it was about Facebook. I had a vision of how things would be in the future [laughs]. Now that we’re in the future, it’s not as horrendously bad, although people are being really bad about their privacy. If you upload your family pictures online somewhere, even if you think you’ve erased them from the server, they’re still there. “Blank File” is all about that. I saw it happening…I’m a Nostradamus [laughs].

Blistering.com: I’m trying to think about how the Internet was in the late 90’s. It was predominantly email, so how did that topic strike you early on?

Kakko: I didn’t consider computers per se at the time. I had a computer, but I wasn’t spending much time online. I had to dial through a phone modem [laughs]. It wasn’t quite as fancy as today. The starting point was all of the phone cards we had at the time, and when you’re shopping on the concord, someone knew what you bought. I found that somehow, disturbing. It’s great to realize that after so long, your songs are still valid. Maybe not in the original sense, but still important.

Kakko: Not this year. Right now, we’re getting ready for summer festivals in Finland, then mainland Europe touring starts. Sometime next year, in the first half of it, we’ll come back to North America.