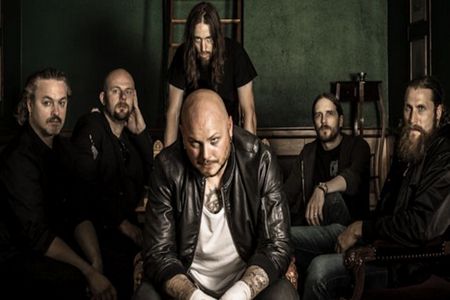 Few bands are as synonymous with melodic death metal as Soilwork. Plugging away through nine full length albums over the course of almost two decades of existence, it’s easy to see why. Despite seemingly perpetual line-up changes through the last ten years (though things seem to have stabilized since 2012), the band’s penchant for combining thrashy, Gothenburg riffing with soaring choruses has become quite identifiable. Despite moving in a more modern direction, the band has managed to hang onto longtime fans a bit better than some of their peers.

2015 promises to be a very busy year for Soilwork. On April 7th, the band will release their first ever live album/DVD, which was recording last year in Helsinki, Finland. Not only that, but the band is currently in the midst of recording their 10th studio album. We were able to get a hold of drummer Dirk Verbeuren to see how things were going in the Soilwork camp. See below for a discussion of the upcoming record, their live cd/dvd release, and a look back at The Living Infinite.

Dead Rhetoric: I saw that you finished your drum tracks. Are all the recordings [for the next album] complete or are there still more to go?

Dirk Verbeuren: I think we are pretty much in completion of the basic guitar tracks now. I’m not sure about the rest of it, all I know that Bjorn [Strid] is about to start doing his vocals in the next few days. I’m not sure if any keyboards have been completed or any of that stuff. We are kind of in the middle of it is a good way to put it.

Dead Rhetoric: I also saw you are using two kicks for the first time. What sparked that idea?

Verbeuren: To be honest, that idea was sparked by Satyr of Satyricon. I was talking with him about drums in general, while I was doing a few gigs with them back in early January, filling in for Frost. He just said to try two kicks because soundwise, it opens a lot of options to have slightly different tuned kicks and it sounds a lot better than just playing on the same kick. I had switched to the double pedal when I was a really young drummer for practical reasons, which are obvious, and had never really reconsidered my position on that. I just kept playing with my double pedal. When I went to the studio for this new Soilwork record, they had two kicks and I remembered that conversation with Satyr and figured I’d give it a shot. That’s how it happened. It sounded great so I’m glad I did it.

Dead Rhetoric: So does it sound significantly different? I heard the one track that you put up, but did it alter your approach at all?

Verbeuren: It felt a little bit different to play that way, so I had to adjust a bit. It’s actually with the left foot. It’s a little different to play on a separate pedal than on one that’s connected to the other. As far as my approach goes, I don’t think it really had an impact on that. So soundwise, it’s just cool to have a slightly different tuning on both kicks. It makes all of the kick rolls sound a little bit more alive, I would say, is the best way to put it, versus just having the one sound just playing a bunch of notes. Now you kind of have two sounds that aren’t audibly, massively different but enough so that the rolls just sound better. That was my main motivation to try it.

Dead Rhetoric: Soilwork has had a steady line-up since The Living Infinite. With having the same line-up for two albums in a row, did that make a difference in terms of songwriting?

Verbeuren: Definitely. It was the first time we wrote with David [Andersson] on The Living Infinite and I think we all didn’t really know how it was going to turn out at first. But he’s an extremely talented songwriter on top of being an extremely talented musician. So for this time around for the new record we are currently working on, we knew that he was going to have a lot of weight in what we were going to write, which he did. He wrote a number of songs; we worked together on them. He also has great input on other people’s songs when he interprets his guitar parts on those. So it was a more familiar terrain this time around. I would say that for me, right now this is a dream team. Everyone in the band writes music, and we all get along really well. You can’t really ask for more than that.

Dead Rhetoric: In terms of what fans can expect, is there anything else about the new album that you can mention at this point?

Verbeuren: Well, to be honest, I haven’t heard any finished songs. We usually demo mostly drums and guitar. Not necessarily all the final guitar parts either, and I haven’t really heard any vocals at all. And no keys, since Sven [Karlsson] always brings in his keys once the basic frames of the songs are done. That’s always a new discovery once the album is ready, for me at least [laughs]. In general, I can say that it’s going to be a little bit of a different twist on things this time. I think the album has a pretty aggressive and dark undertone to it. There’s quite a bit of aggression in it, and some heavy crushing [sounds], and then some fast songs. I felt a bit more like a barbarian playing my drums on this one. I felt that some of the songs needed not so much frills and complicated and technical stuff but just straight-up hammering, and drums in your face. That was some of the vibe, but it’s definitely going to sound like a Soilwork record. I have no doubt about that. We are always trying to let our feelings of the moment speak, and it will be interesting to see how it comes out.

Dead Rhetoric: In terms of the live album, I feel like it was something that had been mentioned for years in advance. What made you decide that, after The Living Infinite, it was finally the time to just go ahead and do it?

Verbeuren: I think it was a matter of finally getting to it. I know we’ve been talking about it since I’ve been in the band, so about ten years. It was just a big undertaking and there was always something that didn’t work out. Whether it was someone’s schedule, or a line-up change, or people were just tired of touring for a while and couldn’t imagine going through this whole project again. It was just like, we have this double album out, let’s just do it. Everything felt good and everyone was getting along, which is probably the biggest, key thing when you are in a band – with everyone being on the same page. Then it was just a matter of making the calls and setting it all up and doing the groundwork to actually get to the point where we were on the stage recording it. Sometimes you just have to kick your own ass and get things going.