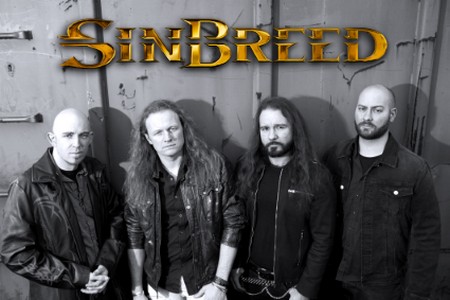 When it comes to power metal, Germany tends to be one of the countries that always has a hankering for the speed riff, the twin guitar harmonies, the mead hall sing-a-long chorus, and thunderous double bass galloping along for the ride. Sinbreed are another act ascending up the ranks, thanks in small part to their Blind Guardian connection through drummer Frederik Ehmke and guitarist Marcus Siepen – although as you’ll learn in our conversation with guitarist Flo Laurin, he has had to step down due to the worldwide touring schedule the main band requires.

Their new album Master Creator has a great blend of European speed and American finesse, always keeping the melodies on the vocal and music front in mind no matter what the tempo is. Blind Guardian and Gamma Ray are equally important as Riot and Vicious Rumors to these musicians – championing a style that may rise and fall depending on the time period or what’s ‘hot’ in heavy metal, but not to the true at heart.

Reaching out through Skype on a weekend afternoon, Flo happily handled my queries with a calm confidence as we bounced around from topic to topic. Prepare to discover more about his fears of recording a ballad for a normally fast/heavy power metal band, making a visually chilling video in today’s tight budget marketplace, as well as a love for acts like Mortification, The Black Dahlia Murder, and Billy Joel.

Dead Rhetoric: Let’s get the obvious question out of the way early- second guitarist Marcus Siepen recently stepped down from Sinbreed. Did he give you any specific reasons why he left the band? I would imagine it had a lot to do with his Blind Guardian workload…

Flo Laurin: Absolutely. This was the one and only reason. The true professional that he is, he let us know ahead of time so we were able to handle the new situation. And it was quite obvious that we had to deliver the follow up record during the touring process for Blind Guardian, so it wasn’t just doable for him. Everything was cool, we are still friends but for this record there was just no time for him to participate, unfortunately.

Dead Rhetoric: So will you solely handle guitar responsibilities in the studio and hire a second guitarist for live dates, or remain a four-piece in all endeavors?

Laurin: The Sinbreed songs, they are really written for two guitars, with a lot of thought of harmonizing everything. To combine the two guitars, so for the Master Creator record I did all the guitars on my own, and it worked pretty well despite a heavy workload. For live shows we do need a second guitarist and we hope to not get a hired gun, we want a permanent live section member. This is future stuff that we will focus on after the release of the record.

Dead Rhetoric: Master Creator is the third and latest Sinbreed album. Was this another diverse songwriting effort, as it seems to possess a great cross-section of influences across your own domestic scene as well as the US scene? Were there any particular challenges or surprises that came up during the entire process?

Laurin: Cool that you mention this, the third record is the one where the other guys contributed the most in writing credits. The first album was all on my own, the second one Shadows has a few contributions here and there, but for Master Creator it was cool that I was able to step back a little bit into the producer’s role. I think I only wrote 3-4 songs in total for the record, the rest were done by Herbie, Alex, and Frederik. It’s good that you recognize our different styles and approaches on the record because we wanted to color it for everyone, be open-minded with the songwriting ideas. We have a Sinbreed record that is still Sinbreed, still have our songwriting but this turned out pretty cool.

Obviously one of the challenges is Frederik came up with a ballad “At the Gate”, starting with the piano thing going on. I was at first not a big fan for it, because with Sinbreed most of our material is about being fast and heavy. Like I said before it adds some color to the record, the song turned out pretty cool but it was obviously a challenge to have such a song. Herbie had a different approach, the monotone nature throughout the verse, it was tough to record and arrange but turned out pretty good. We’ve known each other for so many years, there were no real surprises when it came to the recording studio fortunately.

Dead Rhetoric: Your recent video release for “Moonlit Night” has quite a storyline and cinematic quality amidst the band performance aspects. Can you tell us your thoughts on this piece – as it’s the type of video that one could easily see on the old MTV Headbangers Ball programs beyond the obvious social media promotional channels? The fear in the woman as she was trapped in the room with the bug sends chills…

Laurin: Yes. We are pretty proud of the video and it was not that easy to shoot. The whole song, the lyrics are based on a famous German writer Franz Kafka, and this is really brain stuff. It’s based on his book The Metamorphosis, if people want to read it up. It’s a challenge to fill a whole book into a song, and then make a video on it. The director did a very good job, the bug that was created had a very high standard, we must not forget that this is a heavy metal production so the budget is not very high. We are happy with the outcome, the actress was super cool, and we had a lot of fun shooting the video. Arranging the storyline as a team with the director, it’s something different and not a standard heavy metal video with five guys in a warehouse. It was a bit risky as to how it will be received by the fans and the media, but we are very happy with what we’ve heard back on it so far.

Dead Rhetoric: Where do you see the major differences between the studio and the stage when it comes to Sinbreed?

Laurin: In Sinbreed everything is based on fast and heavy metal guitars. In the live section where we are still playing two guitars and harmonized guitar stuff, there can be a lack of the rhythm part. Even if it’s the same song which the fans know from the album, when it’s live Alex with his bass is coming more and more into play with distorted bass. Frederik and Alex are taking care of the speed and rhythm section so the guitars are from more of the lead guitar approach. You have a different style of song. When (the audience) hears the song live, it’s definitely recognizable as a different approach and I really like that.

Dead Rhetoric: Do you have any specific rituals when it comes to your own songwriting?

Laurin: I have tons of ideas which are recorded in my cell phone. When I start a song, the first thing that comes to my mind is the BPM -beats per minute of the song. Which is quite unusual because a lot of my colleagues say, okay they want the riff as a certain sound, and then you write the song around that riff speed. Very often I use a click trick and give the beats per minute, and then I start jamming on the riff. In my case it works very well. Sometimes in warm up great ideas also come up, I’ll record the idea and then work it out from there too.

Dead Rhetoric: How do you make the songwriting diverse when you are playing at faster speeds?

Laurin: What I can tell you, when we rehearse the songs before we record them, we do track the drums from Frederik at a demo status. When he is playing the drums at 160 BPM, I will purposely slow things down to 100 BPM. So I know which figures he is playing on the double bass, on the toms, and so forth. And then I try to follow him as close as it gets. When you play the song at 60 BPM’s faster, you really know the song, there’s no chance for you to miss a part or miss a break. And I am really into the song, through this procedure I can double-check if the speed is right. That’s something that’s really helpful, it takes a lot of time to know the song… four minute songs can be eight minutes, so you practice it back and forth but it’s totally worth it.

Dead Rhetoric: You’ve performed at Progpower USA with Sinbreed and also took a two-week vacation in the spring last year to Florida. What are your impressions of our country and our metal fans?

Laurin: Yeah, you are right. It’s pretty cool. When Glenn (Harveston) gave us the opportunity to play at Progpower USA, it was a kicker for us. We had the new record out, it was a debut and to play such a really big festival is not very common for a starter band. I always have very good feelings, I have good contact with people that I’ve met at the festival, nowadays still. There’s a healthy community over there, I enjoy the news and the fan driven portals, Ultimate Metal, Metal Underground. This is really what I like, we don’t have this as much in Germany – I’m a big fan of the scene over there. In my private life you did mention that I have visited the country- I do have family related in California which I haven’t visited yet but I certainly will do it. 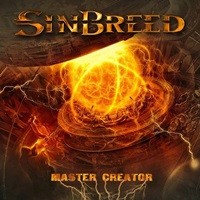